Intimate Wars: The Life and Times of the Woman Who Brought Abortion from the Back Alley to the Boardroom 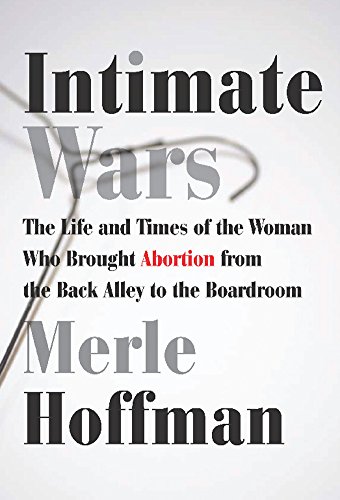 “Although the structure of Intimate Wars and the attention so deeply focused on the author seems frequently purposefully ego-centered, it is abundantly clear that Merle Hoffman cared deeply about the women she encountered in dire straights. . . . in the very last chapter, entitled Amazing Grace, Ms. Hoffman talks with depth and poignancy about adopting her daughter, Sasharina. It is the highlight of the book.”

It goes without saying that the decades between the 1960s and today were, and remain, turbulent years with regard to women’s reproductive issues, especially relating to abortion rights.

A book narrating the history of that topic, in particular, an autobiography of one of the activists at its forefront should be a stirring read. If Intimate Wars were written by someone other than the author of the book, Merle Hoffman—someone who interviewed her subject, researched her activity, and related her tale more objectively—the book would be a more enjoyable read.

Unfortunately, credit to anyone but Merle Hoffman for her role in the fight for women’s rights is thin; and as an autobiography Intimate Wars is a difficult read. Ms. Hoffman drops names, places, literary titles, and activities like squirrels drop nuts.

The chapters are generally presented in a chronological order, but within each chapter the author frequently takes side trips into her own personal life and away from her role as advocate for women’s reproductive rights. The structure of the chapters is sometimes unclear, as in the chapter on The Russian Front.

Ms. Hoffman spends 10 pages at the beginning of that chapter discussing her political intervention in a New York Mayoral race and the rise in race-related crimes before getting to the topic of the chapter—the increase in the abortion rate among Russian immigrant women.

Her concerns result in an invitation to her to present at a symposium in Russia and an ongoing relationship with the topic of health care in that country. She spends the last six pages of this chapter discussing other international and religious abortion issues. A chapter of 25 pages only dedicates nine pages to the chapter topic?

As described by Ms. Hoffman in her narrative, she details how she singlehandedly threw down the gauntlet for the pro-abortion cause by preparing pamphlets, organizing major awareness and fundraising activities, and establishing physical locations to address the issues. She gives little if any credit to any other individuals who may have helped in the fight—unless that individual possesses celebrity status—and for the most part those are only fleeting references.

Ms. Hoffman clearly expresses early in the book that the success of the Flushing Women’s Center and its subsequent center, Choices, was due to her skills and intervention at all levels—from dealing with arrogant doctors, to writing literature, to offering meeting space, to holding patient’s hands, to de-unionizing efforts, to political activities. It is not to say that these efforts were not each monumentally important to the success of the Centers, and on a grander scale, the success of the movement, but Ms. Hoffman’s presentation of herself as the single individual leading the fight makes the book tough to stomach.

If only two words could be used to best describe Ms. Hoffman, they would be obsessive and activist—words she uses to describe herself in Intimate Wars.

When one slogs through the author’s self-aggrandizing self-portrait, the information that is left on the fight for women’s rights concerning safe abortions and “choice,” is extremely important and thorough; the factual data regarding issues of abortion, clinic bombings, AIDS awareness, and the pro-choice fight in general are interesting and often frustrating to read.

Although the structure of Intimate Wars and the attention so deeply focused on the author seems frequently purposefully ego-centered, it is abundantly clear that Merle Hoffman cared deeply about the women she encountered in dire straights. As well, her approach to feminism was not male bashing, but female empowering—and she should be credited for the decades of effort she put forth in addressing the plight of the women for whom she worked.

And in the very last chapter, entitled Amazing Grace, Ms. Hoffman talks with depth and poignancy about adopting her daughter, Sasharina. It is the highlight of the book.