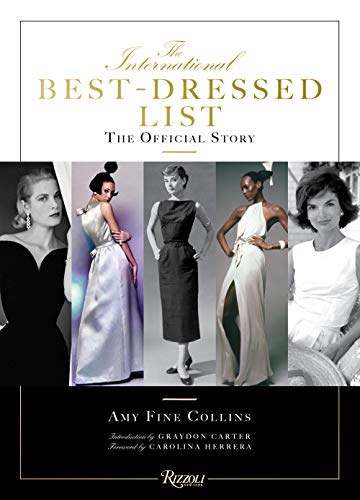 Amy Fine Collins while relating the history of the list also exposes the incredible and indomitable powerhouse that took the form of Eleanor Lambert, who by today’s state of fashion intellect and knowledge has been largely forgotten. It was she who truly drove and steered the fashion business on both sides of the Atlantic to where we are today.

Fine-Collins also reveals the behind the scenes power struggles as well as histrionics that accompanied the publishing of this list each year. The list was invented by Lambert and perpetuated for decades with her savvy skillset. The fact is that it was a sort of meaningless list, and yet it was a list that gave gravitas to those who were the building blocks of modern fashion.

The more educated and well informed reader will realize that for the better part of 40 years, those who appeared on this list were not those who borrowed clothes or jewelry; no, they were the ones who drove the business of fashion at its highest level. This is best demonstrated when Brooke Astor greets Jayne Wrightsman at some grand affair and says, “I suppose that gown cost $40,000 to which Ms. Wrightsman replied straight faced, no, $37,000!” Yes, that is what it once was, and women of this type who truly supported the fashion business. These ladies made it their business to look and wear the best clothes that their money could buy no matter the occasion.

Do not think that only famous names appear on these lists as that would be a huge mistake since there are names that will most probably find unrecognizable. Some were awarded placement on this prestigious list a single time, but if the adage “you are judged by the company you keep” is true then this was the list you wanted to be on if you were a clothes horse who spent inordinate sums of money on your wardrobe.

The take away here is that those who have followed fashion, society, and even politics will realize that in the world we live in  today The International Best Dressed List has certainly been diminished by those who appear on it as well as how they attained their inclusion into this once rarefied world. The beauty of the list was, at its apex and before the advent of borrowing clothes, loaning jewelry especially before the sudden appearance of a stylist who picks out your clothes for you, and lastly before a celebrity or notable was actually paid to wear a dress or a piece of jewelry.

Is it an interesting informative read? Well, this reader certainly remained magnetized as well as actually learning quite a bit about the machinations that went on to get on the list and how one was deemed worthy of being on the list.