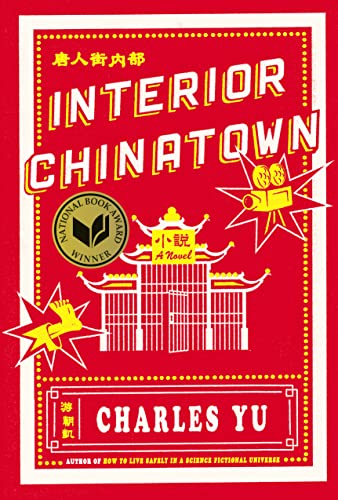 “In the jaunty, acerbic Interior Chinatown, Charles Yu confronts the clichés that assail Asian men by going metaphorical, conflating their plight with the quintessential American dream: making it big in show business.”

The Asian American male—stereotyped, devalued, or plain ignored by American culture at large—has long been the subject of many a stand-up routine and midnight bull session. In the jaunty, acerbic Interior Chinatown, Charles Yu confronts the clichés that assail Asian men by going metaphorical, conflating their plight with the quintessential American dream: making it big in show business.

Presenting his tale in hard-boiled screenplay format (with Courier font, natch), Yu sets most of the action in the confines of a seedy Chinatown restaurant that could be a set in any number of movies. And indeed, within these hackneyed surroundings, hackneyed genre scenarios play themselves out, as good-guy cops (primarily white, of course) mix it up with sullen Asian hooligans, with minority actors limited to stock characters like "Kung Fu Guy" (the ultimate goal for all Asian American actors) or the silent "Background Oriental Male." As Yu warps and blurs the line between life and scripted entertainment, he makes it painfully clear that for the average Asian dude, the entertainment world is no different from the real world when it comes to humiliating assumptions and glass ceilings.

The unlikely star of this absurdist universe is struggling young actor Willis Wu, a starstruck son of long-time Chinatown actors (his father used to be "Kung Fu Guy" but has now aged into "Old Asian Man," while his mother has progressed from "Seductress" to "Old Asian Woman"). Suffering in bit parts, Willis works toward the near-unattainable role of "Very Special Guest Star" while non-Asian actors grab all the glory.

Yu has a devilish good time poking fun at the racially blinkered ways of Hollywood through Willis's eyes, particularly when the latter ends up on an all-too-plausible cop show titled "Black and White." Featuring a handsome black man and glamorous Caucasian woman as the leads, the program overflows with wincingly witty repartee and smoldering looks between its stars. Meanwhile, Willis and his Asian brethren are stranded on the sidelines, reduced to playing props, corpses, or shifty gang members (replete with bogus Chinese accents). Not even an onscreen death provides escape from this perpetual hamster wheel; after a production-mandated "mourning period" of 45 days, Willis is back on the payroll, stuck in another prescribed role: comic relief, second-rate baddie, sacrificial lamb.

For all its cutting commentary on the plight of the Asian male, Interior Chinatown cuts deepest when it dives into Willis' family history. This isn't the first time Yu has used the trappings of genre to get at more personal concerns; his previous novel, How to Live Safely in a Science Fictional Universe, utilized its time travel storyline to tell a fraught tale of sons and fathers. Family dynamics similarly wend their way through Interior Chinatown, as a generous portion of the book documents the lives and dashed dreams of Willis' immigrant father and mother, and his uneasy relations with them as a first-generation Asian American. Yu mines their modest, hardscrabble lives and their collective humiliation for genuine pathos, pulling the curtain back on their claustrophobic conditions: grungy tenement units, squabbling wannabe hoodlums, aged seniors just waiting to die, everyone trapped in a "pretend version of the old country," destined to be overlooked.

Yu slips and slides between stage directions and straight prose in the latter half of the novel as an honest-to-goodness narrative emerges. Willis (and symbolically, all Asian men) is offered an avenue of escape when he becomes entangled with a mixed-race actress ("I can be objectified by men of all races"), and a cozier version of the American dream beckons: a quiet life in the suburbs, surrounded by completely assimilated children unburdened by racial memory. But even that brief illusion soon gives way to a phantasmagoric courtroom scene in which Willis is put on trial, along with every other sad-sack Asian American he represents.

Down the stretch, Yu gets polemic, rushing us through a whirlwind summation of documented injustices against Asian Americans, questioning whether there is any chance of winning a game that's been rigged from the start. It's a bit of a comedown after the spicy satire that's gone before, but Yu quickly diverts to Plan B, as Willis confronts his predicament the only way he knows how: with a kung-fu brouhaha. "All of those roles . . . he never got a story," sums up one of the characters with a sigh, and if Interior Chinatown boils down to a series of humorous poses in search of a story, it's still rollicking fun, and its reclamation of Asian American history, with all its attendant sorrows and hopes, holds out the possibility of a new, true story ahead.