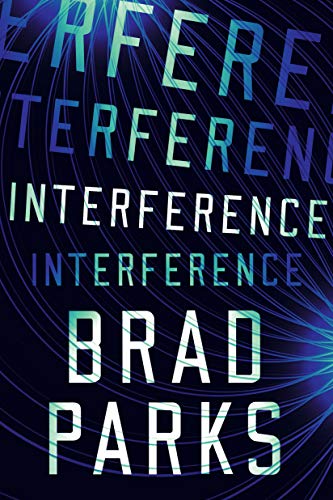 “Aptly taps into a creeping sense that scientific advancements are endangering the world in ways that are almost too difficult for most everyday people to comprehend.”

Brad Parks has written ten novels, including some memorable bestsellers, and is the only author to have earned the Shamus, Nero, and Lefty Awards. None of that could have happened without his ability to craft stories built on sound structural engineering with architectural and design flourishes that appeal to avid mystery and thriller fans.

All of that’s on display in Interference, which aptly taps into a creeping sense that scientific advancements are endangering the world in ways that are almost too difficult for most everyday people to comprehend. In this case, those advancements are related to quantum physics that might be highly prized in warfare while putting the scientists that deal with them in mortal danger.

The lead scientist here is Matt Bronik, a brilliant Dartmouth University researcher who’s spent the smartest years of his professional life determining, as stated in the preface, that “two particles can be born with an intrinsic connection to each other.” In the rest of the preface and sprinkled through the narrative is the notion that these “particles,” are forever linked even “across galaxies.”

This explanation will be seen by unscientifically minded readers as the story’s key flaw, and by others as a point of intrigue that keeps the pages turning. After two reads of that preface and multiple reads of the paragraphs that explain the concept in detail, it’s still difficult to understand what Bronik’s discovery means in tangible terms.

Can it have devastating applications to weaponry or kill millions of people? Does it threaten the environment in terms more horrifying than the 2020 blazes that burn through America’s Pacific Northwest or the melting ice caps? Or can it lead to something even worse?

While none of those nightmare scenarios are connected to the science, a true sense of menace is conveyed when Bronik begins having terrifying seizures that take place in the lab while he’s at work. The fear is compellingly conveyed in the chapters narrated by his wife, Brigid. Because she doesn’t completely understand the scope or meaning of her husband’s research, she’s terrified by the mysteries of what she doesn’t know.

In the first of many nicely drawn twists, Bronik is rolled out of his office by EMTs of a suspicious origin after suffering his third seizure. That opens the door to an investigation led by a detective who’s forced to outmaneuver know-it-all colleagues who assume–erroneously–that he’s too old and tired to get the job done.

As always, Parks shapes the narrative with fast turns and switchbacks that lead readers to second guess what they think they know about the characters. He also does a nice job of conveying how much more dangerous Bronik’s experimenting must be once shadowy guys from the U.S. Department of Defense seize control of the crime scene.

Yet even at that point it’s difficult to understand exactly what danger is posed, until the unveiling of one additional twist that brings home the power of Brigid’s first-person chapters. At several points she likewise has to question how much she really knows about her husband, which reinforces a certain truth: Most of that stuff about quantum physics and particles is really about the emotional connections between human beings. It all leads to a finale that’s both thrilling and heartfelt, and a good reason to trust the science of Parks’ fine storytelling.