Instruments of Darkness: A Novel 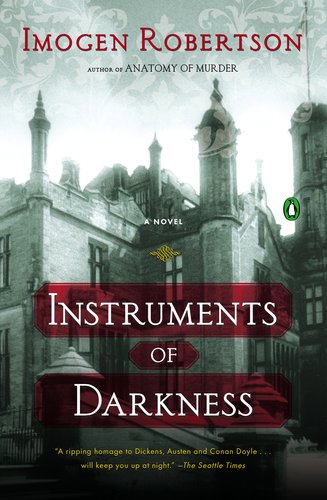 Were it possible to review Imogen Robertson’s debut historical mystery, Instruments of Darkness, through two separate lenses—first as a straight historical novel, and, secondly, as a straight mystery—then the reader would be presented with two starkly different reviews: One raving, and one raving mad.

Back in 2007, the opening pages of this novel won The London Telegraph’s First Thousand Words of a Novel competition—and deservedly so, for the story begins strongly, introducing two sharp-minded, three-dimensional characters reminiscent of Anne Perry’s investigating duo, Thomas and Charlotte Pitt.

These prickly-edged and thoroughly self-aware individuals—Mrs. Westerman, a highly competent mistress of a Sussex country manor and the wife of a seafaring man; and Mr. Crowther, an introverted but brilliant anatomist with a murky past—are outsiders in the claustrophobic late 18th century English village. This makes them uniquely suitable to investigate a series of murders that involve the tormented and powerful aristocratic inhabitants of Thornleigh Hall.

Ms. Robertson trots these two novice investigators through several gruesome and minutely depicted forensic examinations. As they grow mutually respectful of each other’s intelligence, they also grow suspicious of one possible perpetrator. Despite the danger to their own selves, they join forces to buck local politics in search of the truth.

As a historical novel, the book is brilliant. Ms. Robertson has written a finely shaded depiction of the social and political intimacies of a small English village, and, in a secondary plotline, she depicts just as clearly the gritty streets of London. Her main characters are pure creatures of the 18th century, keenly aware of their position in life—and its fragility—as well as zealously observant of both things and people. With such depth of place and character, it is no wonder that this novel is the first of a continuing series.

Herein lies the problem: Considering the author’s substantial talent in character-building, it’s curious that she pitted the ardent intellect of Mrs. Westerman and Mr. Crowther against paper cutout villains, who skulk about, issue threats, and smirk inappropriately. So black-hearted are these scoundrels that the main characters’ delicate and deliberate tasks of 18th century evidence-gathering—which could have been milked for maximum suspense—only reveal what is already known or strongly suspected.

Despite the flawed mystery, Instrument of Darkness is an impressive debut historical, which hints at great promise for this talented novelist’s future works.