Instrumental: A Memoir of Madness, Medication, and Music 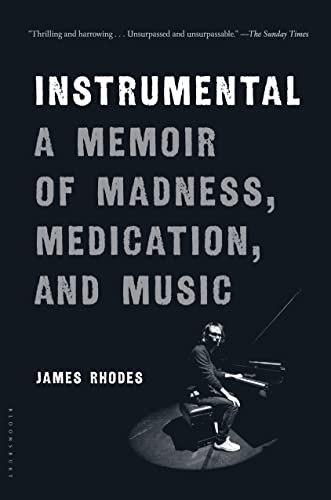 British classical pianist James Rhodes is a rebel with a cause as he unleashes his iconoclastic view of the vaulted world of classical music in concert halls and on British TV and in the streets and on the iTunes classical charts, where his five albums have been bestsellers. Rhodes exalts the music of the music of Chopin, Beethoven, Liszt, Schubert, and Bach, always Bach, like they were rock stars.

On top of Rhodes’ technical artistry, he speaks in concerts about the often tragic lives of classical composers and how their personal lives informed and inspired their music. Meanwhile, Rhodes’ own life has been full of devastating circumstances as he reveals in his memoir Instrumental:  A Memoir of Madness, Medication, and Music.

It is, indeed, not like any other book about classical music that you are likely to read. Rhodes not only lives his truth but triumphs as a person, a survivor, and a singularly irreverent artist.

As a concert pianist on the international circuit, Rhodes has had a singularly remarkable career. Not only because he had no formal training until he was 14 and even after showing great promise, he stopped playing altogether for ten years. He returned to training and performing in his 20s, almost by accident, while applying for a position in arts public relations.

His academic and professional life was going well. But he was still going through a private hell that he writes about in graphic detail. Rhodes gives a brutally honest account of being repeatedly raped for five years by a 47-year old teacher at a private school. It is tough reading and one of the most harrowing memoirs of survival you are likely to read.

The abuse was so severe that Rhodes had to have surgeries on his spine because of being subjected to repeated rape at such a young age. The impact on his life has resulted in a series of breakdowns and cycles of self-destructive behaviors including drug abuse, episodes of anorexia, cutting his own skin, and attempted suicides through drugs and other means.

Be warned, Rhodes uses no euphemisms in this book about the abuse he suffered as a child or what he did later to survive the psychological trauma. His abuser was eventually prosecuted, but that was little help emotionally to Rhodes. He was treated at various times for various overlapping psychoses and has been hospitalized many times.

Rhodes writes honestly and tenderly of his first marriage, but one that ended in bitter divorce and his separation from his son, and he dedicates the book to him. Though on amicable terms, his ex-wife sued to keep Rhodes memoir from being published in Britain because of its graphic nature and what she saw as potentially negative impact on their young son. Rhodes won in court and the book was published in the U.K., and is now being released in the U.S.

When his wife found out he was cutting himself, she and his friends intervened. He was in the hospital, then out, then acting out and spiraling down to the point he was about to commit suicide and was temporarily rescued by a friend who paid for him to go to a special rehab in Arizona. It worked but only for a while; his life fell apart again. At one point he made a video suicide note, but after watching it couldn’t imagine his son ever seeing this record of him planning his own death.

Rhodes writes so passionately and eloquently about his classical music and his artistic goals. His connection to music is as a sanctuary and a vital part of his continued inspiration for wanting to live, love, and make glorious music. His TV documentary Don’t Stop the Music has raised more than $1 million for instruments in U.K. primary schools. In his epilogue Rhodes reveals that life is still hard in many ways, but he has found new personal and professional peace and even happiness.