Inside a Silver Box 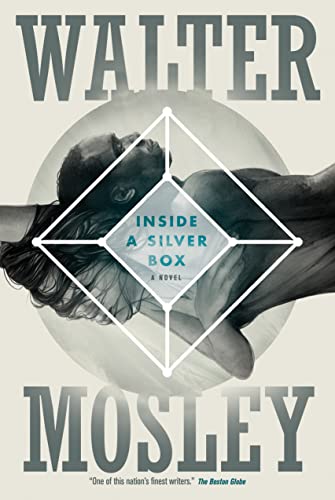 “We all in different dreams, everybody in the whole world. But there’s a place where those dreams come together and, and, and when that happens it’s just so beautiful that it hurts.”

The nature of reality, the power of dreams, and the possibility of God (or gods) are deeply interwoven into the narrative of Walter Mosley’s latest novel, Inside a Silver Box.

Uptown socialite Lorraine Fell wasn’t expecting to be attacked during her morning run in Central Park; she was even less prepared to be resurrected by her killer. Ronnie Bottoms, a downtown thug, only intended to rob the young, white runner, but a lifetime of debauchery led him to attempt to rape her and ultimately to kill her.

An ancient alien intelligence (the Silver Box) teaches Lorraine how to send her thoughts/spirit into living bodies, with the instruction to find Ronnie and return with him to the Box’s secret underground cave. After Ronnie shares his life force with Lorraine she is resurrected, and the pair are set the task of saving the world from another ancient alien threat.

Walter Mosley isn’t the first name one thinks of when dealing with speculative fiction. His usual calling card is mystery and literary fiction, so Inside a Silver Box is a surprising departure from type. Fortunately, he brings along his trademark strong dialogue to this story. Ronnie and Lorraine are firmly ensconced in their respective socio-economic classes, and Mosley allows their interchanges to display that.

Inside a Silver Box also showcases Mosley’s lyrical prose and evocative turns of phrase: “parroting a man who might have been his father; a man who’d died before the boy’s sweat had smell,” or “This was her opportunity to be the woman she had always dreamed of being; with a clear eye and sure feet—the offspring of a goddess tired of men having everything.” Mosley draws a clear picture in these moments, a picture not dependent on physicality, but instantly recognizable in the heart.

The opening section, dealing with the background of the Silver Box and its ancient power struggle against the Laz, is cumbersome as a story beginning, but taken on its own it reads like heroic poetry: “Somewhere, nowhere, everywhere—all ending here; the silver box traveling in space and through time, encompassing with its sometimes six, sometimes six septillion walls the entire breadth of existence.”

Mosley is comfortable in the midst of words and ideas, using this story to pose big questions about life and death, about victimhood, about poverty, racism, and sex. With his background of deprivation and depravity, Ronnie is the perfect vessel through which such questions can be asked naturally.

Lorraine’s answers, couched in terms of her posh upbringing, are often necessarily unsatisfactory; it is through the search for common ground that both characters have the freedom to grow and change. Poetic language lies cheek and jowl with earthy language in Inside a Silver Box, as well; at times shocking, that juxtaposition shakes up the narrative and enhances the earth-bound nature of Mosley’s prose.

Unfortunately, the science-fiction aspect of Inside a Silver Box only detracts from Mosley’s inner and sociological explorations. The story is uneven, often going off on interesting or disturbing tangents, only to be jerked back to the hugger-mugger of aliens and the superpowers Ronnie and Lorraine develop after interacting with the box. Transitions are rougher than usually seen in Mosley’s stories; Inside a Silver Box reads like two novellas, one an urban narrative of haves and have-nots and the other a fantasy, jammed together uneasily. The contrast between the achingly poignant meeting between Ronnie and his second grade teacher and the weak, abrupt “science-fictiony” ending makes it clear where Mosley’s heart lay with this story.

Mosley’s casual use of racial and class stereotypes in the person of Lorraine is troubling, as is his justification for rape (or almost rape, in this case). He seems to be implying that Ronnie was in the wrong, but Lorraine was somehow culpable in her attack because in the past she had been blind to the trials of the downtrodden. As this is not presented from a character point of view, but as part of the expository narrative, it can’t be put off on an uneducated Ronnie. It is certainly a controversial point of view, and not one many people would find acceptable.

Inside a Silver Box is an uneasy and ultimately unsatisfying work of speculative fiction. The narrative is filled with rich language and poses interesting questions at times, but Mosley seems uncomfortable with the sci-fi trappings of his story. He misses finding “the place where those dreams come together,” but there is still beauty to be found within the pages of this book, thought-provoking (and sometimes just provoking) ideas. Mosley will make you think with this one.