Inside the O'Briens: A Novel 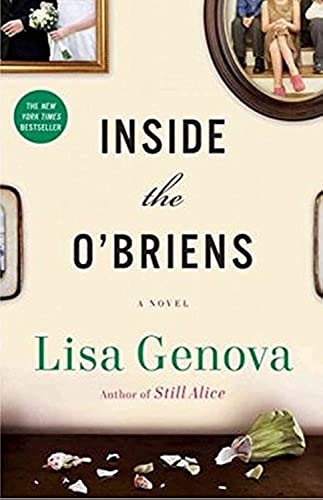 Lisa Genova is a bestselling New York Times author and neuroscientist whose novel, Still Alice, was made into an award-winning movie about Alzheimer’s disease.

Picking up where she left off with her insightful and powerful novel, Still Alice, Lisa Genova tugs at the heartstrings as she documents Joe O’Brien’s descent into a living hell known as Huntington ’s disease (HD). Her knowledge of the subject matter makes the story seem almost nonfiction in nature, since it’s rife with medical information enough to school readers about an insidious little known killer.

HD is diagnosed through a neurological exam. Patients exhibit symptoms such as a progressive loss of voluntary motor control and an increase in involuntary movements. Joe O’Brien, a Boston cop, exhibits both of these and tries to hide it as best he can from family and colleagues—with little success.

This tight knit Irish Catholic family suffers from the usual problems related to such things as careers, marriage, children, etc.; however, those all pale in comparison once they learn the scope of HD and the fact that it’s an inherited neurodegenerative disease. Each of the four O’Brien children has a 50 percent chance of inheriting the gene. There is no treatment and no cure.

Joe hates the fact that HD is robbing him of his future. He’s only 44 years old when the disease makes itself known. He loses his temper and his always-organized police reports begin to fall apart. Joe’s wife, Rosie, tries her best to be patient, as her husband gradually loses his ability to hold things and drops glasses and family keepsakes. Their home begins to look like a battlefield as Joe’s uncontrollable anger causes him to punch holes in the walls.

Joe and Rosie’s children are torn about whether to take a blood test or not to determine if they have the gene. Either way, their future is fraught with anxiety and uncertainty. Do they risk passing the gene on to their yet to be born children, or should they be tested and then live with the knowledge that they will die an early slow painful death?

The author does a wonderful job of inserting the reader into the family dynamic. The sadness and desperation are at times deeper than a bottomless pit. Hopelessness and depression slowly seeps into this loving family, tearing it apart and pitting one against the other. Very sad.

As Joe’s HD progresses, we see how it affects his job and his marriage, causing him to make decisions he would have never made otherwise. Yet through it all, there is hope, and perhaps this death sentence is just the thing to make Joe O’Brien a better man.

Just as Still Alice educated the public about Alzheimer’s disease, so also does Inside the O’Briens become a tool of awareness and education.

The author delves deeply into the subject matter without overwhelming the reader with too much technical and medical language. At the same time, her description of what happens to a family when HD sneaks into their lives is compelling and masterful. I expect Inside the O’Briens will also hit the big screen and garner several awards. It’s that good.