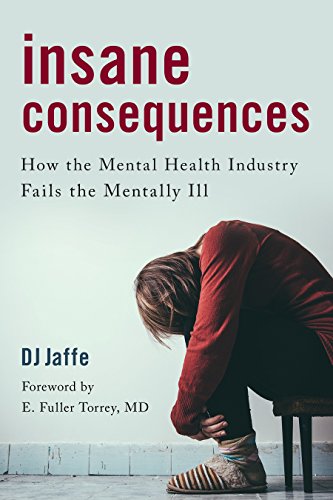 “The most frequent question I hear from parents is: Who will take care of my mentally ill loved-one after I die?”

It is a chilling question that no family member should ever have to ask, yet it is a question that faces millions of Americans. DJ Jaffe, executive director of the nonpartisan think tank Mental Illness Policy, writes a condemning critique of the nation’s mental “health” system in his new book, Insane Consequences: How the Mental Health Industry Fails the Mentally Ill. His arguments are compelling as he paints of picture of the suffering the mental healthcare system puts the seriously mentally ill and their families through.

This book is heartbreaking and alarming.

Here’s the issue in a nutshell. The seriously mentally ill are too sick to know they are sick, but there is almost no path to find them incompetent and outside of very wealthy families, no resources for long-term commitment. The seriously mentally ill are for the most part left to the streets where they are forced into criminal acts (trespass, public urination, public drunkenness, etc.) as part of daily life and become victims of others while incarcerated or on the streets. Because of privacy laws, families are for the most part helpless to intervene.

In a well-documented and heavily resourced work, Jaffe writes plainly about how those who suffer from serious mental illness have been marginalized. Their families, very often desperate for help, find that they can do little until they or others have been victims of violence, because of laws that allow a seriously mentally ill person to reject treatment.

According to Jaffe, we have allowed a rosy picture of mental health and mental illness to be created for us by organizations that take money to cherry-pick those individuals who are easiest to treat. It is a world in which the worried well or those with mild and treatable mental disorders receive the lion’s share of resources and attention.

The truth is far from what is portrayed by mental health service providers. Jaffe writes, “not everyone recovers, sometimes hospitals are necessary, involuntary treatment is preferable to incarceration, and there is a group of the most seriously ill who left untreated become suicidal, homeless, criminal, incarcerated, and yes, sometimes violent.”

Sometimes violent. That’s not the message we get when a spree killer shoots up a movie theater or a mall. It’s not the norm, we are told. And yet it happens over and over again. The fact is that left untreated, a significant percentage of the seriously mentally ill will become violent, and those they are most likely to injure or kill are their own families.

What are the facts?

How do we address these issues? Jaffe provides a multi-faceted plan. In many ways, his plan swings the pendulum too far. Aren’t there enough resources to treat all who suffer from mental illness in its least and most troubling forms? From the research Jaffe provides, there seems to be, if resources are pulled from areas of waste and re-allocated. Most important, Jaffe argues that laws must be changed so that families can intervene on behalf of their loved ones before violence erupts.

Here are a few of Jaffe’s most important solutions to the issues facing the mentally ill:

Insane Consequences: How the Mental Health Industry Fails the Mentally Ill is an important work for health and criminal justice advocates. The appendices alone should put this book in any psychiatrist’s, police officer’s, or social justice activist’s library. Sadly, it was probably born at the wrong time in history and likely will fall on deaf ears in the halls of our lawmakers. However, if someone you love suffers from serious mental illness, this book provides critical, factual information to families who feel alone and under-resourced, facing an impossible situation.