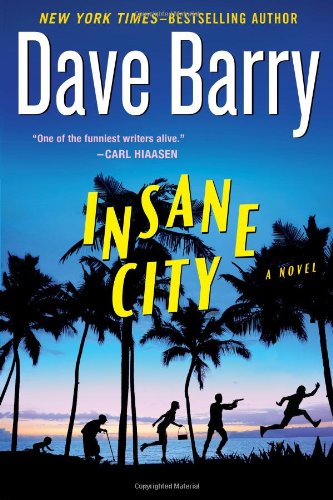 “It’s the best wedding ever.”

If you don’t have a smile on your face when you finish Dave Barry’s new novel, Insane City, you might want to check if you still have a pulse.

It’s been 10 years since Mr. Barry last published a novel, and it’s about time this Pulitzer Prize-winning author stopped messing around writing movies and plays to return to entertain us with his hilarious prose.

Tina Clark, a high-powered and beautiful lawyer, is planning her lavish wedding to underachieving nice guy Seth Weinstein, but no matter how sweet she is, Tina’s inner Bridezilla cannot—and will not—be crossed.

“Two days before his wedding, Seth was in a cab with his best man Marty, who was advising him on the responsibilities of the groom.

“It’s a tradition, said Marty. “The groom, about to give up his old lifestyle forever, spends one last night partying with his buddies, laughing with them, crying with them . . .”

“Throwing up on them,” said Seth.

“Not on the best man,” advises Marty, “That’s the function of the lower-ranking groomsman.”’

Of course most readers have seen the movies as well—The Hangover, Wedding Crashers, and Bridesmaids—but this plot raises the bar along with the barstools on wild and crazy bachelor parties.

While the wedding is being planned, Seth saves the lives of a Haitian mother and her two children who float half-dead onto the shores of the private hotel beach. Seth’s nice guy personality gets the best of him, and he hides the illegal family in the Ritz Carlton suite his billionaire father-in-law is paying for until family members can be found for the Haitians.

To make matters worse, Seth has misplaced Tina’s ring the night before the ceremony, and Cyndi, a hot Cuban-American, teams up with him to try and track it down. Meanwhile the groomsmen are drunk, naked, and AWOL.

In addition to solving these problems, the wedding planner is more OCD than the bride as she tries to hold the event together. The guru who is officiating is making moves on the bride, and Seth’s slow-moving, medical marijuana-loving parents have arrived in matching velour tracksuits and white sneakers:

“It was unclear to Seth why two people who could take as long as ten minutes to walk across their own living room needed to dress as though at any moment they were going to strip down and compete in the 100-meter high hurdles. But he was long past questioning such things.”

With this cast of insane characters trying to get to the church on time—and in one piece—Mr. Barry takes the wedding guests and us on a funny, emotional, and surprising race down the aisle.

It’s the best wedding ever.