Innocent Blood: The Order of the Sanguines Series 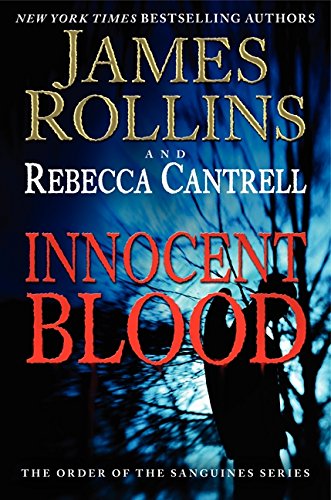 “. . . a well-written paranormal series that captures the imagination and leaves the reader panting in anticipation . . .”

Combine storylines from Dan Brown and Bram Stoker, turn them upside down, supercharge the blend, and you have an approximate description of Innocent Blood, the latest title in The Order of the Sanguines series by James Rollins and Rebecca Cantrell.

An attack by creatures controlled by vampires on a California ranch thrusts archaeologist Erin Granger and Army Sergeant Jordan Stone back into a relationship with Father Rhun Korza and his order of Sanguines, redeemed vampires now serving as Catholic priests whose only diet consists of the Blood of Christ in the form of consecrated wine. Outrageous as such characters seem, Mr. Rollins and Ms. Cantrell manage to make them believable.

Erin, Jordan, and Father Korza joined forces in the first title of the series, Blood Gospel, to locate a lost gospel written by Jesus in his own blood. Once the gospel was found and hidden away again least its revelations cause a crisis in the Christian religious, the three believe their quest is over.

Instead another challenge awaits them. Judas, the betrayer of Christ, has decided his way to redemption is to bring about the End Days. “Centuries ago, he had finally discovered why Christ had cursed him immortality. So he could do what he must do in the coming days.” Judas plans to open the Gates of Hell.

But who is the True Woman of Learning? Is it Erin Granger? Or is it a woman descended from Countess Elizabeth Bathory, the notorious aristocrat who bathed in the blood of her young female subjects?

More mysterious is the identity of the First Angel. Is it young Tommy Bolar, cursed with unwanted immortality in Book One of the Order of the Sanguines and held prisoner by Rasputin? Erin, Jordan, and Father Korza believe so.

From the hot, dusty plains of Israel to the Arctic Circle and back to Rome, the three from the Blood Gospel prophecy track the First Angel in a struggle to keep the literal Gates to Hell locked.

Mr. Rollins and Ms. Cantrell blend myth, legend, Christian theology, fiction, science, and history together to create a well-written paranormal series that captures the imagination and leaves the reader panting in anticipation for the next adventure that pits Good against Evil.