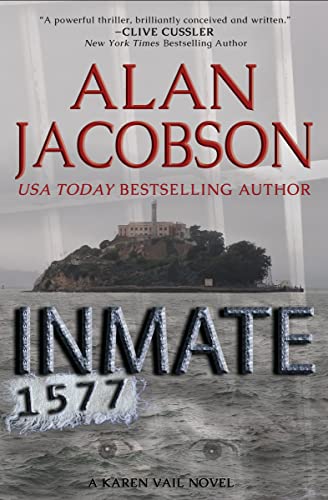 “Alan Jacobson’s novel has more twists and turns than a giant slalom course. . . . a mystery masterpiece. . . . Inmate 1577 is a grand slam that ranks Alan Jacobson on par with such literary luminaries as Michael Connolly, Nelson DeMille, and James Patterson. This one will be tough to top.”

When I initially glanced at author Jacobson’s latest offering, 536 pages worth, I thought to myself, “I’m going to need a lot of patience to get through the entire book without getting bored.” I was right; I did need to be patient. But it wasn’t from the fact that it was going to be a long read. No, my patience was tested because I could hardly wait for the conclusion to learn the identity of the killer. Alan Jacobson’s novel has more twists and turns than a giant slalom course.

Inmate 1577 is a mystery masterpiece. The author has written his best work to date, creating a classic psychopathic character that will be the inspiration for thriller writers in the years ahead. Impressive also is the level of research done in order for Mr. Jacobson to create this particular monster. He relied on his friend, former FBI Profiler Mark Safarik to get it right. Safarik, a former colleague of mine, is a subject matter expert whose talents are much sought after by courts and media. In fact, Mr. Jacobson uses his friend in the story and refers to him using his actual name. Interesting.

Mr. Jacobson’s fans are familiar with the book’s protagonist, FBI Agent Karen Vail. They’ve followed her exploits in three other stories; however, in this novel the author has hit the mark with her character. He’s given her a humanity that was heretofore somewhat incomplete. In Inmate, he has fleshed her out, and we see Profiler Vail exhibit doubt, frustration, depression, and a lack of self-confidence. None of this takes away from her abilities or professionalism. Indeed, it all draws us closer to her and dispels the notion that she’s made of ice.

Inmate 1577 is a book that tells two stories, one of which is historical. Much of the novel takes place in San Francisco, with the former prison, Alcatraz (The Rock), as the stage. Inasmuch as Mr. Jacobson takes us back in time 50 years, he had to perform a ton of research. The dialogue, the characters, and the inside look at prison life are all spot on. His background work included interviewing former prisoners and guards from The Rock. He read nonfiction books on the subject, even perusing prison records to ensure his story would be as authentic and factual as possible.

His diligence paid off. Inmate 1577 tells the story of a man caught up in a prison system so unrelenting and dispassionate that it virtually drains every last drop of life from its captives, much like a spider’s web trapping its prey. In vivid imagery and dialogue, Mr. Jacobson captures the hellish limbo that prisoners endure. Readers will feel, hear, and smell the fear and hatred that is present in the world of corrections. The dynamic that exists between prisoners, causing them to trust men who should never be trusted, is graphically illustrated.

Throughout the book, I tried to figure out who the killer was using deduction and the clues provided. I failed; the ending took me by surprise. That’s the mark of a great mystery/thriller writer. Inmate 1577 is a grand slam that ranks Alan Jacobson on par with such literary luminaries as Michael Connolly, Nelson DeMille, and James Patterson. This one will be tough to top. Good luck, Alan.