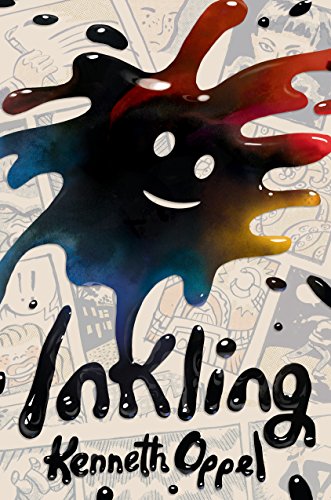 “No one was awake to see it except Rickman the cat.”

Did you ever have an imaginary best friend? Did you talk to him or her? Well, watch out because an inkblot is about to become your best friend, too.

Ethan is in sixth grade. He can only draw stick figures. His father, Peter Rylance, a famous illustrator of graphic novels, is stuck. For the past two years, he has not been able to produce anything new although he's being hounded by his publisher, Karl Worthington. He lies to Karl, telling him that he has an idea but he needs more time. Peter is too preoccupied to give art lessons to his son. Since his wife died, he has become a "zombie dad."

Ethan is in for trouble when he and three classmates, Pino, Brady and Soren, are working on a graphic novel as a school project. Ethan is chosen to draw the gorilla. His classmates assume that he has a talent for drawing just like his father. But no matter how hard he tries, Ethan's gorilla is unrecognizable. He can't get past his stick figures. He begins to despair and is embarrassed to admit his failure to his friends.

Enter Inkling. No one is awake to see it except Rickman the cat. It jumps out of Peter Rylance's sketchbook. "As the ink moved, it left no smear behind it, just a blank page. The ink rippled, like dark water with something swimming beneath the surface." Rickman tries to catch it, but it leaps off the page and slithers away. This burst of creativity is about to change everything in the Rylance household.

Ethan sees it first as a black shadow crawling up the wall. He jumps out of bed, stepping backward away from the tarantula. It begins to slither off the wall and onto the floor. Looking more closely, Ethan sees an inkblot with tendrils moving in all directions. His mouth opens wide and his eyes begin to bulge when he sees this slimy blotch of ink move onto his drawings. It erases all the drawings as it slurps up the ink.

When he begins to erase Ethan's math book, the story for his school project, and his favorite comic books, he begins to worry. But he's amazed when the inkblot starts drawing the pictures by filling in his stick figures. Ethan soon realizes that it can talk. They both choose the name "Inkling" and it becomes his best friend. He also knows that Inkling has to gobble up ink in order to stay alive.

What Ethan doesn’t know is that Inkling has come into their lives to help unblock his father, teach Ethan to draw, heal their broken hearts over the loss of a wife and mother, and find a lost item.  "As Inkling drew, it wasn't just a picture he was creating, it was a whole storm of feelings from Mr. Rylance's sleeping mind. Loneliness and sadness and anger and regret."

Ethan is so impressed with Inkling's drawings that he presents them as his own to his classmates. But Vika, one of his classmates, becomes suspicious. Soren asks if he could borrow Inkling to write down the exam questions. But Ethan feels that is cheating. Soren answers that presenting Inkling's artwork as his own is also cheating.

The suspense begins to heighten when Inkling goes missing. Vika and her dad, Karl Worthington, Ethan's father's publisher, stole Inkling and tried to get him to draw for them. At this point the story becomes adventurous as another inkblot named Blotter begins to emerge. Meanwhile, Inkling is on a quest to find something important that Mr. Rylance has lost.

The book leaves the reader wondering what constitutes cheating, whether lying is necessary in certain situations, and what the Rylance family really needs. Although farfetched at times, its cartoon drawings bring the story to vivid life. For middle-graders who want a funny, quirky story brimming with interesting ideas and adventure.