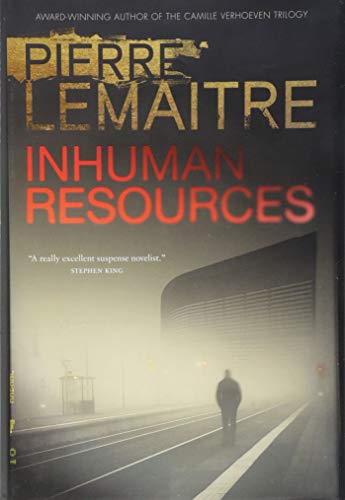 A literary thriller whose plot twists, turns, backtracks, and loops like a medieval maze until one despairs of ever finding a way to a resolution. It is a puzzle palace, a funhouse of deception, where nothing and no one is what one first believes.

“My name is Alain Delambre. I am fifty-seven years old. And four years ago, I was laid off.”

A former human resources director, Alain and his wife Nicole live on her salary, and whatever part-time menial jobs Alain can find. They have burned through their savings, and can barely pay the mortgage on the apartment they bought when Alain was a highly paid member of the corporate work force.

One of Alain’s odd jobs “(when the salary is this low, you have to say it’s “odd)” is at warehouse where he works three hours a day packing cardboard boxes with medications to be sent to pharmacies. The two men on his shift—he refers to them as “drones’”—are Charles, who drinks heavily and lives in his car parked on a Paris street; and Romain, a young man from the provinces who dreamed of becoming an actor.

Romain’s provincial accent which even elocution cannot erase dooms his dream, but he is too proud to return home empty-handed of fame and fortune. “Now he works hard to pay his way, and the only role he aspires to is that of the prodigal son.”

Alain considers himself the third drone whose financial circumstances are dire and becoming more so each day, and he sees no way out. No one wants to hire a man his age, no matter how successful a human resources manager he may have once been. Now he is unemployed and unemployable.

When a man is depressed and desperate he may commit acts he never believed himself capable of—such as violence. “I was perfectly aware that I was angry, but I never expected it to turn to cold fury.”

When Alain bends over to read the lot number off a shipping label, his boss, Turkish immigrant Mehmet Pehlivan, kicks him in his buttocks. “That is when I did something for the first time in my life: I tilted my head back . . . whipped it forward with a sharp motion. Just like I’d seen on television. A head-butt they call it.”

Alain sustains a large bruise on his forehead. Mehmet receives a broken nose and other injuries as a result of the head-butt and subsequent fall to the floor. Charles and Romain assure they will be witnesses for Alain if any problems arise.

There are problems: Alain is fired, which is only to be expected, but Mehmet and the company file a lawsuit. Worse, and unexpected, Romain is promoted and suddenly denies have witnessed the incident. Charles offers to go to court, but a drunk who lives in his car and packs cardboard boxes for a living is not one’s first choice for a witness.

Bruised and even more desperate, Alain receives a reply to a job application. “I look for work like a dog sniffs a lamppost. No illusions, but I can’t help it.”

BLC Consulting—CEO Bertrand Lacoste—wants Alain to come in for an interview. Although Alain is certain he won’t be hired, he makes it to the list of prospective human resources employees. He only has to outperform his competitors in a practical field test. The test is unusual—immoral is Nicole’s judgement—but Alain has no choice.

The test is a fake hostage taking of several upper management employees of an energy company. Alain and the other finalists must determine which of the fake hostages handles his captivity best, and thus is most deserving of promotion.

Despite Nicole’s disapproval, Alain prepares for the test by borrowing a large sum of his daughter’s savings to hire a private investigator to discover any weaknesses of the prospective hostages.

The night before the field test Alain learns from one of his competitors that the test is rigged. Bertrand Lacoste has already decided to hire his young lover as his human resources manager.

Alain falls into a black depression, but more than that, he feels a fury stronger than any he has ever felt. “Tears of disarray. I am devastated, inconsolable . . . I take a deep breath . . . anger overwhelms me.”

Alain asks his private investigator, a former policeman who was fired for his drug addiction and unreliability, to find him a gun “with real ammunition.”

One assumes that Alain plans to turn the fake hostage taking into a bloodbath. One would be wrong. Alain’s actions are the beginning of a series of plot twists, reversals, and deceptions that make one’s head spin in a futile attempt to decipher a puzzle created by blending psychology, manipulation, and daring.

Inhuman Resources is, among other things, a warning that the milquetoast manager down the in Human Resources Department at your place of employment is not the harmless bureaucrat he appears. Never underestimate a man whose profession requires a certain skill at manipulation.

An altogether entertaining and compelling psychological thriller underpinned by certain social issues: unemployment among older workers and their feelings of failure and humiliation, and the desperation of those discarded from the working world and passed over for new employment because of age. If society deems you to have passed your Sell-By date, you lose not only your job, but your self-respect and hope.

One cannot help but to cheer Alain on in his risky attempt to restore balance to his life, at least in the financial sense. but it would be easier if Alain were a more likeable character instead of a man who excuses his manipulative behavior toward his family as something he has to do to ensure their security. That motive is true, but like much of what Alain reveals in periods of angst, best not trust him.