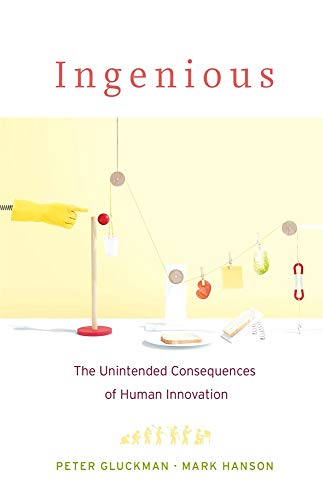 “This is not an easy journey, but neither has the evolution of humans from the savannahs of Africa to the surface of the moon been idyllic.”

Sir Peter Gluckman is the University Distinguished Professor and Director of the Centre for Science in Policy, Diplomacy and Society at the University of Auckland. Trained as a pediatrician and a biomedical scientist, Sir Peter has joined forces with Mark Hanson, the British Heart Foundation Professor and Director of the Institute of Developmental Sciences at the University of Southampton, and one of the United Kingdom’s premier researchers on developmental pathways to disease. The joint effort of these distinguished academics has produced a monumental book combining biological science, genetics, history, politics, and the human experiment.

Ingenious is a study of mankind and its development over the millennia. The first chapter offers a clear precis of Charles Darwin’s theories and its modern applications. Life is malleable. We adapt to the conditions of where and how we live—a truly incredible phenomenon.

Living beings adjust. In order to survive and pass on their genetic make-up, creatures must find suitable places to find food, safety, and potential mates. They alter their niches and relocate. They evolve to foster changes that will enhance their survival. They attract mating partners by displays that otherwise serve no purpose.

Darwin’s formidable work did not complete the study of evolution. Biological scientists have had much to do. The authors discuss 20th century studies on the impact of inheritance on who we are. Their discussion is recondite and, at times, problematic. The authors’ narrative, at times complex and inaccessible, is not a treatise for novices.

The culture of society fluctuates with the environment. Is culture inherited? How long does it take to re-fit human social life in a changing environment? The authors conclude that genetics carry some, but not all, of the answers to these vital questions. Genes play a role in the transmittal of culture working in sync with learned characteristics. People change their social habits within a lifetime as well as over a period of generations.

Evolution offers insight into groupings of humans—what the authors explore in two short chapters on “settlements.” Human efforts to procure food through hunting and later through agriculture impacted on human attributes. For example, growing food did not require large bodies, and archeologists have determined that body size decreased as humans learned to till the soil.

The book closes with three chapters on technology and human life, focusing mostly on computers. The advent of artificial intelligence and its machinery has just begun to influence our very being. Human autonomy will be forever changed by the technology we continue to create.

The penultimate chapter of the book addresses the costs inherent in technological change. Most of these impacts were unforeseen. The genetic changes humans experienced took many generations. By comparison, the digital changes happen in a flash.

Finally, the authors peer into the future, suggesting avenues humans might pursue. Here they raise more questions than answers, more uncertainty in the contest between short-term aspirations and fundamental changes. They pose science as our only hope. With an American president who calls climate change a hoax, the authors emphasize that science and technology are the only bulwark.

The authors’ erudition is exemplified by the 70 pages of notes, a bonanza of sources and resources for those who wish to follow their path. This is not an easy journey, but neither has the evolution of humans from the savannahs of Africa to the surface of the moon been idyllic.