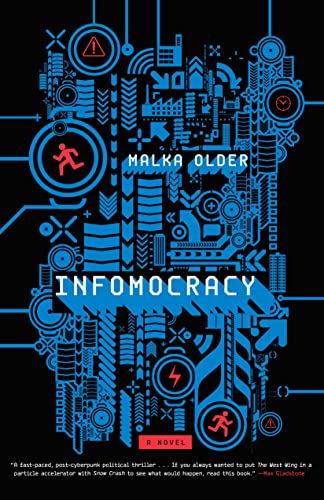 Infomocracy is a high-concept political thriller from debut author Malka Older. Set in primarily Asia and the Middle East, the novel creates a vision of the future in which most of the world is deep in an election cycle for the micro-democracy “Supermajority.”

“Information,” a powerful search engine monopoly—basically Google on steroids—is the engine of microdemocracy. They are the engineers behind the near-complete global shift from sovereign nation-states to competing governments without borders, geographic “centenals” that are constantly being bombarded by data and propaganda.

Older’s prose is clean and vivid. She is skilled in world-building and has built a vision of the future that feels possible in the current volatile political climate. There is no doubt that Older’s choice of theme is incredibly timely, and her deconstruction of politics and sociology in Infomocracy will invoke some very relevant and powerful emotions.

Creating an intelligent, unique and fully fleshed vision of the future is an admirable skill that practically explodes off the page in this debut novel. Envisioning a future where a dependent and voracious populace is fed by an almost constant stream of media is so close to the reality of the present that it is startling. Infomocracy is infused with a very genre-specific techno-punk flavor that gives readers enough distance from current events yet immerses them in a detailed, nuanced world where governments are fragile and held accountable by the emotions and will of the majority.

Most of the novel is exposition, explaining the delicate intricacies of the micro-democracies and role of Information, which in itself feels like a character that manipulates events. What became frustrating as the novel progressed, however, was the sheer volume of explanation of campaign strategy and structure. The scope of the world Older has created is impressive in its scale and detail, yet all of it becomes fancy scaffolding for a building that never materializes out of the fog.

Further, the entire book suffers from the present tense, which always seems to automatically put distance between the reader and the characters. Character development is limited to the events at hand, which renders the protagonists one-dimensional and bloodless. The tense choice also means that tension is lost in paragraphs of detail about trivial tasks, like making tea or ordering a drink, that add little but to explain character preference and culture.

Overall, Infomocracy would interest those who enjoyed books like Paolo Bacigalupi’s The Windup Girl. The themes differ, but the use of present tense and political intrigue make comparisons between the two novels inevitable.