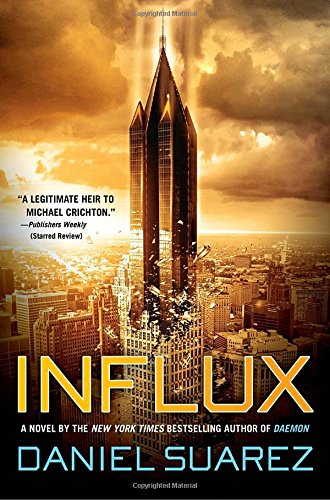 “What would happen if someone invented a gravity mirror like that. Could we trust any government to use it responsibly? Would it become a device of terror to enslave humanity? Perhaps such questions are why Daniel Suarez dreamed up an organization like the BTC in the first place.”

When American audiences were captivated by The Jetsons and Star Trek in the 1960s so many science fiction fans figured that surely we’d have space-age gadgets like flying cars, artificial intelligence, and mutable gravity by the 2010s. Well, we can Tweet up a storm and instantly share our goofy pet photos with our high school buddies, but we’ve been slacking in the earth shattering discovery department.

What if humanity really has made monumental advances, only they were concealed by a massive government conspiracy that hordes the power of the future for the elitist few? That’s the premise of Daniel Suarez’s science fiction romp Influx.

Building on the success of his previous novels Daemon, Freedom, and Kill Decision, Suarez unlocks a fascinating scenario where a secretive government agency called the Bureau of Technology Control (BTC) wields almost godlike power. Cruise missiles are no more threatening to them than paper airplanes. There’s no such thing as a secure communication channel or even a room where they can’t overhear—because they have dust-sized cameras.

Soon the BTC’s mission changes from protecting society from technology that would generate chaos to dominating the world. Although they’re outnumbered, it’s hardly a fair fight when they can make whole army units burst into flames.

The story opens as the BTC swipes the most amazing, and devastating, invention yet—Jon Grady’s gravity mirror. It can bend gravity in any direction, both enabling flight and ripping apart the landscape by reversing the gravitational pull. For some reason, Grady doesn’t show the BTC any gratitude for them faking his death, blowing up his lab, and confiscating his life’s work. When he refuses to aid them, the BTC sends him to Hibernity, an Alcatraz for super geniuses.

Grady endures prolonged mental and physical torture in Hibernity. While those scenes are full of despair and difficult to stomach, they plant seeds of anger and revenge in him that makes the story more heated upon his inevitable escape. Grady’s a free man, but he’s facing an organization armed with a satellite that can reverse gravity with such force that it can tear a city from the bedrock of the earth.

The novel is full of breathtaking scenes with victims falling upward, hurled into the heavens until the air grows thin. The BTC can literally pluck tanks off the ground like toys. Grady’s edge is he’s the man who invented this technology and he’s determined to free the other investors in Hibernity. Plus, he’s got help from a BTC defector, Alexa the genetically engineered soldier who’s as beautiful as she is deadly.

There are some fun scenes in here, like when Alexa teaches Grady to zip through the sky on his personal gravity mirror. The cat and mouse game as they stay ahead of BTC’s attempts to catch them is also a thrill. The plot doesn’t take any wild, unexpected turns, but it has imaginative inventions and large-scale action sequences that could only occur in Suarez’s unique world.

When Influx was over, it left me thinking: What would happen if someone invented a gravity mirror like that. Could we trust any government to use it responsibly? Would it become a device of terror to enslave humanity? Perhaps such questions are why Daniel Suarez dreamed up an organization like the BTC in the first place.