Indomitable Will: LBJ in the Presidency 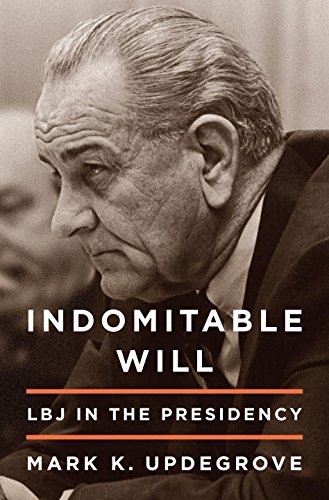 “Indomitable Will is an instant classic . . . Mark Updegrove’s scholarly mastery of oral histories, original source documents, and presidential writings, combined with a flair for exquisite storytelling make for a fascinating, can’t-put-down, lust-for-more read.”

Barack Obama has said that one person can charge the world. Who was the one person most responsible for Barack Obama in 2008 being elected President of the United States? Who set in motion the cultural change that led to greater rights and choices for women, gays, and seniors? Lyndon Baines Johnson, popularly known as LBJ.

By employing his political acumen and consummate skills to make things happen in Washington, LBJ implemented profound cultural and social change in America in the 20th century, making it possible, just over a half century later, for a black person to be elected president.

LBJ was individually most critical in enabling the incumbent president to aspire to and achieve the nation’s highest elected office because he recognized and craftily engineered the imperative of achieving voting rights and unrestricted place access to blacks.

In 1964, after he assumed the presidency following the assassination of John F. Kennedy, there were only 39 elected black officials in the South and 300 in the entire country; by 2000 these numbers had dramatically increased: to 6170 and 9040.

The some 10,000 blacks elected to public office when Barack Obama ran for president in 2008 represented not only numerous precedents of black leadership but also 10,000 political teams, campaign organizations, and groups of grassroots supporters who rallied to favor their candidacies.

Indomitable Will: LBJ in the Presidency is the illuminating portrayal of an individual, widely criticized and discredited in his time, who subsequently has come to be recognized by scholars as belonging right up front with the other lauded presidents such as George Washington, Abraham Lincoln, Franklin Roosevelt, and Thomas Jefferson.

Appropriately, more attention is devoted to the early years of the LBJ presidency and his domestic agenda, including his support of space exploration. He was less accomplished—truth told: plagued—in international affairs, most specifically Vietnam.

Far more comfortable with domestic face-to-face political dealmaking, in which he could employ his legendary one-to-one “Treatment,” he recognized his own limitations in international affairs, one time telling his advisers, “Boys, I don’t understand foreigners. They’re different from us.”

Mark Updegrove offers not another great man biography but rather an innovative, illuminating, extraordinary portrait of a fascinating contradictory and conflicted, enduringly important president. Critical events are described, analyzed, interpreted, and juxtaposed with commentaries on context and competing agendas through a word collage of observations and recollections of the 123 diverse individuals who interacted with and observed LBJ.

The author artfully combines LBJ describing in his own words his programs and priorities; others’ observations on what he did and how he did it; and transcripts of key LBJ phone conversations—ranging from the most sensitive, high stakes affairs of state to an amazing “Saturday Night Live” morphed to Animal House dialogue about ordering some pants.

In this style of providing verbatim extracts from writings and transcripts of interviews and conversations, the author makes the words representative of the time and place.

In more than a few occasions, the public positions of high profile individuals are in direct contradiction to their private statements. This style of biography is so much more powerful, immediate, and revealing than an author’s secondary assessment, judgment, or speculation due to limited access to original source documents. Here in Indomitable Will the author provides readers with verifiable, essential source documents.

LBJ initially committed himself to implementing both his predecessor’s program plus his own priorities—a vision that soon stretched far beyond those of his predecessor.

Close aide Jack Valenti recollected that within hours of assuming the presidency, LBJ revealed to his closest friends “with stunning precision the mountaintop to which he was going to summon the people.” Later LBJ would state,” Now that I have the power, I (mean) to use it.” In using that power, he built coalitions, made deals, got people to do what he wanted, through understanding and providing them what they wanted.

Addressing LBJ’s personal style, the author writes,” there was no one-size-fits-all approach from Johnson towards his staff. He was more complex than that, more nuanced. While there are abundant accounts of his tyrannical behavior, there were many people who never experienced it at all.”

Liz Carpenter, his wife Lady Bird Johnson’s press secretary, observed, “Kennedy inspired, which Johnson was not capable of doing, and Johnson delivered.” LBJ delivered through application of phenomenal intelligence. Though not widely read, he read people like no one else, leading his special counsel Harry McPherson to observe, “If he wasn’t the wisest man I ever knew, he was the smartest. He could process and collate things in his mind as fast as anyone I knew. He always wanted something from the person he was talking to, and he was high-minded and focused in trying to get it.”

Indomitable Will reveals that for all his virtues, LBJ was deeply flawed: bullying, and cruel, critical and hurtful, crass, uncouth and more. Significantly, Mr. Updegrove reveals all of the many dimensions, shades, attributes of LBJ in a warts-and-all treatment.

Though the author is director of the Lyndon Baines Johnson Presidential Library and Museum in Austin, this book is the antithesis of a fawning, whitewashed, hero-worshipping revisionist history. The author’s balanced, full disclosure depiction of the man adds much to the integrity, impact, and importance of this book.

Unfortunately, pursuing his predecessor’s program included a commitment to intervene in Vietnam—an initiative that deeply troubled him and for which he was ill prepared—he continued flawed leadership, such as disregarding advice of counsel that Robert McNamara—the Donald Rumsfeld-like Secretary of Defense: rigid, assertive, and often wrongheaded in his ideas, strategies, and decisions—be removed from office.
Indomitable Will is an instant classic that every serious politician, any leader aspiring to power and influence, scholars seeking to comprehend this country’s culture and the forces that have shaped contemporary society must read, meditate on, and draw lessons from. Mark Updegrove’s scholarly mastery of oral histories, original source documents, and presidential writings, combined with a flair for exquisite storytelling make for a fascinating, can’t-put-down, lust-for-more read.