The Indomitable George Washington Fields: From Slave to Attorney 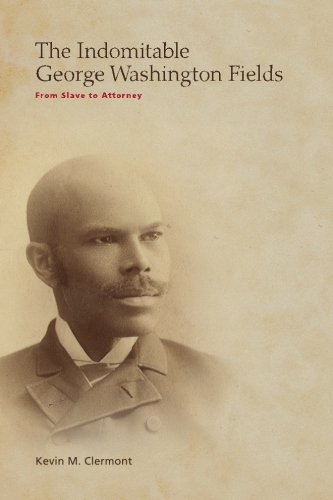 “A great addition to any historian’s library.”

When author and Ziff Professor of Law Kevin M. Clermont decided to search Cornell University’s digital files for anything on “trials by jury,” he had no idea he would soon stumble upon the nation’s next great addition to the slave narratives. But he did.

Professor Clermont found an unpublished thesis arguing against trial-by-jury. Since Cornell University listed its first African American law school graduate as Mr. Eugene K. Jones, Jr. of the Class of 1936, it was initially assumed that this unpublished thesis was written by a white man named George W. Field, Class of 1890.

That assumption was wrong.

After more research, Professor Clermont discovered that Cornell University was almost 50 years off base. George Washington Fields was in fact an African American, and since he graduated in 1890, he was Cornell’s first.

As Mr. Clermont continued to dig into the details about Mr. Fields, he soon realized the enormity of his find: George W. Fields was not only the first black graduate, he was also the first and only ex-slave to graduate from Cornell University’s law school.

This amazing discovery forms the basis of Professor Clermont’s latest book The Indomitable George Washington Fields: From Slave to Attorney, which is divided into three main parts: Details about Mr. Fields’ professional life, his autobiography, and his original thesis.

In part one, readers are introduced to Mr. Fields and his struggle to adequately represent his African American clientele while still practicing the exaggerated courtesies that were demanded of African Americans in that day. Professor Clermont even revisits one of Mr. Fields’ biggest cases involving a 17-year-old African American girl whose white female employer routinely beat and abused her.

While defending herself, the girl mistakenly killed her employer and was quickly sentenced to die. Mr. Fields put his all into the case, but jury voted for death and the girl eventually became “the only female in the twentieth century to be executed by the Commonwealth of Virginia, and the last female under the age of eighteen to be executed in this country.”

Part two is quite stunning. In it, George W. Fields tells the story of his slave life in his own words—sometimes even referring to himself in the third person as “Cock Robin,” the nickname he was given on the plantation. He tells about working in the fields, his great love for his mother, his time with his 10 siblings, and the dreadful time that three of his siblings were sold away.

He writes of watching his mother being beaten on her bare back until she faints, of nearly being “confiscated” by Yankee soldiers when the Civil War comes and of how beloved mother led her remaining eight children through the woods, across a river and to the freedom of the Yankee camps by uttering three strong words: “Come on children!”

Part three is a reproduction of George’s actual thesis, in which he tells all the reasons he opposes trials by jury.

This is a fascinating book that not only uncovers an unsung hero, it allows the historian and the incidental reader to witness the evolution of a mind. It is truly amazing to read of Mr. Fields’ slave life and how a boy so completely unlearned in letters, politics, law and society rose above his shocking circumstances and became a man of letters, reputation and considerable power. Mr. Fields even lost his sight later in life, but rather than give up, he overcame his disability and continued to practice law.

This is a gem of a book that should flourish across many academic landscapes. It would be perfect in middle or high school social studies or citizenship classes. It should (and probably will) be studied in early law classes. A great addition to any historian’s library.