The Indomitable Florence Finch: The Untold Story of a War Widow Turned Resistance Fighter and Savior of American POWs 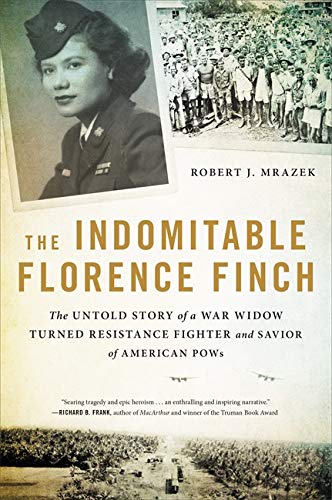 World War II is replete with stories of courage and heroism in the face of evil. It is gratifying to know that not all of them have seen the light of day and continue to be told. This is especially so for those stories that are obscure or little known and even more so when the defiance occurred in opposition to the Japanese, notorious for their brutality and terror tactics.

This publication, by author and former Congressman Robert J. Mrazek, combines all of those elements. It is not only a biography of Florence Finch's early and long postwar life but includes all of the actions that she undertook to handicap the Japanese war effort as an office worker for a fuel company and provide aid to American prisoners of war but also, not mentioned in the subtitle, foreign national civilian internees in the Santo Tomas camp in the Philippine capital of Manila.

Her origins can be traced to the early 20th century after her American father had served in the U.S. Army in the Spanish-American War and decided to stay on. As a mestiza, one of mixed-race parentage, she lived in a world literally between the native people and the Americans, generally looked down upon by both, consequently. As a result, she learned early on to become her own person: self-reliant, accomplished, and intelligent.

Those attributes helped her to succeed in the prewar business world before meeting her first husband, a U.S. Naval officer, and then being engaged in intelligence gathering for the Americans regarding Japanese intentions. When he was killed in the fighting after the Japanese invasion, she was left to fend for herself.

Concealing her work (and her passport) for the Americans, she was able to secure a position in a liquid fuel company run by the Japanese in which she had access to ration coupons, some of which she would falsify to obtain gas and diesel that could in turn be sold to buy food, medicines, and other supplies for the resistance, the internees and POWs, the latter through a secret underground courier system that also provided intelligence to the prisoners on the ongoing progress of the war.

Of course, this work was fraught with danger if she should be caught as the Japanese were merciless. In the event, the fraud was discovered. She was imprisoned and tortured but never revealed her participation despite the pain inflicted under interrogation.

Notwithstanding her contributions, she was willing to do even more. After being returned to Allied control in early 1945, following General Douglas MacArthur's campaign in the Philippines, she came to the United States and, after recovering from her ordeal, enlisted in the Coast Guard where she became the only female member to receive the Asiatic-Pacific Medal.

In later life, she was awarded the Medal of Freedom after paperwork was submitted by an American officer who was a recipient of her aid as a POW and knew her story. Her long and incredible life ended in 2016 at the age of 101.

Besides her amazing story, this is also a very easily and quickly read book. The chapters tend to be very brief, generally just a handful of pages, but the author manages to pack a lot of information into each, ranging from what Ms. Finch was experiencing or doing at one point to the toil and privations suffered by the resistance, prisoners and internees, and the efforts of the Japanese.

Creditably, and helpful, are two maps in the front of the book. One shows the overall Southwest Pacific Theater of Operations and the other being of the Philippine Islands. The photographic section, mid-book, contains many relevant shots of Finch, others who figure in the story, and locations.

If there is any criticism, there are no notes. The Acknowledgments and Bibliography, however, indicate that the largest part of the research done was obtained from the so-called “Florence Archives” and her immediate family members who made a point of learning all they could about her wartime experiences before she passed. Military records, documents, and correspondence from others were also employed.

Finch has now been immortalized, as the Coast Guard Headquarters in Honolulu, Hawaii, is named for her. Most assuredly, the word indomitable should be inscribed on it in front of her name. Florence Finch is definitely an unsung hero.