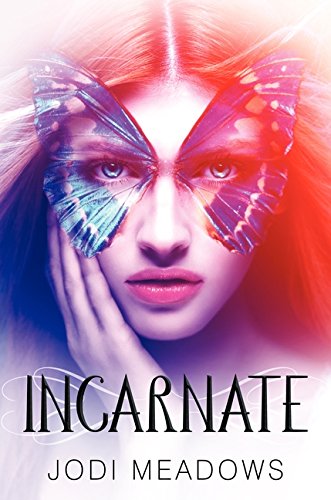 “Creative and inviting, Incarnate offers a new concept into the young adult genre, now overflowing with paranormal and fantasy titles. One can’t help but wonder where the story will go after this first title in the series.”

We all know what it means to be new in some capacity. We were all new to this world that surrounds us at one time, learning what we needed to know as we grew and aged. We got by while making our way as taught by those around us who had once not so long ago been in our shoes. We had guidance and knowledge passed to us and hopefully love and encouragement to light our path as well.

For Ana, the protagonist of Jodi Meadows’ Incarnate, none of that has come to pass. Ana is truly new in a world that is not only old but also populated by those who have lived for thousands of years—centuries that each and every person within the Range and the city of Heart can remember—except for Ana.

In this new world each individual has lived multiple lives and holds thousands of years of memories and reincarnations filled with experiences, learning, and relationships that with each new birth, rebound and build upon one another again and again.

As a child born into this world, Ana is immediately known to all. Sometimes a reincarnated person is born of a different gender or into a new family, but some things never change: like the fact that in their new incarnation, a person may often have similar interests and talents; as well, they always come back within a predetermined time period—that is until Ana comes along and replaces on old soul with what some call her “Newsoul” and others reject as “Nosoul” at all.

It all begins when a teenage girl discarded by her own mother Li and abandoned at birth by her father Menehem, sets out on her own to discover who and what she is and where she came from inside a world that categorizes her as different and doesn’t quite know what to do with her.

Along the way a handsome “young” man called Sam who just happens to be sympathetic to the plight of a nosoul saves her from death and promises to help her along her quest.

What follows is not only a satisfying love story, but also a quest involving adventure and dangerous feats, and an unraveling mystery as to what will happen not only to Ana but to the world that she, by mere virtue of her birth, has shaken up.

Incarnate inventively builds upon the idea of reincarnation, adding fantastical creatures to a genuinely endearing love story. In its pages we also encounter themes of prejudice, discrimination, and complex religiosity lying just beneath the surface of this well written if—sometimes ponderous—novel.

Among a cast of well developed characters, Ana shines as a protagonist, giving the novel a somewhat mature tone. Meanwhile, her relationship with Sam is perfectly paced and real enough to keep readers interested and captivated. Will circumstances allow this couple to come together in the end?

Creative and inviting, Incarnate offers a new concept into the young adult genre, now overflowing with paranormal and fantasy titles. One can’t help but wonder where the story will go after this first title in the series.