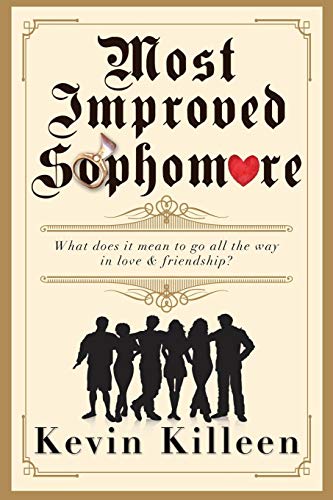 “an enjoyable feast of nostalgia coupled with the poignant joi de vivre of the teenaged male.”

Tony Vivamano and Patrick Cantwell are best friends, twins on opposite sides of the coin.

Tony is the leader. Handsome, Italian, and proud of it, if he isn’t God’s gift to teenage womanhood, he’s most certainly their consolation prize. Where he leads, Patrick follows, sometimes unwillingly.

Patrick is a little shy, inept around girls, and certainly more studious, but he never hesitates to back Tony in whatever plan he has, because they’re friends. This fact sometimes gets them into hilarious if potentially serious scrapes, though they always manage to come up smelling like roses.

On this particular time in their lives, it’s St. Louis in the ’70s; they’re both sixteen, sophomores at St. Aloysius all-boys school (and that should be a warning there). Tony has decided studious Patrick, who’s only interested in finishing a writing assignment on wisdom, needs some distraction.

His argument: “Our biology demands we have sex, and who invented our biology? God. God wants us to have sex to keep humanity going. We know from religion class you’re not supposed to have sex until you’re married, or even look at a girl. No one can do that.”

While Patrick mulls over the subject of wisdom, agonizing over a thought-provoking book written by Mark Twain, he doesn’t realize he’s about to go on an adventure that will make him into that “new man,” the priests at St. Aloysius keep telling him about. . . . “Don’t be a Nowhere Man. Get involved; be a new man.”

“Maybe, he thought, it would be useful to see the world on a Friday night. Maybe, just maybe, in the midst of some Friday-night revelry some truth would leap out, perhaps the missing part of his paper.”

In Tony’s mom’s car, dubbed The Love Machine, the two end up at a party in the better part of town, home of the owner of von Bierhart beer. There’s drinking and swimming, and strip poker-playing. While Tony indulges in the former, Patrick is conned by one of the adult guests into kissing the first girl who says ‘hello.”

Patrick accepts the dare, and it happens.

“She had said hello. He had to kiss her now. Patrick’s blood jolted. He hated to do it.  She was so annoyingly pretty . . . His entire sermon of disinterest poured into her from his split-second glance, and before she knew it, he grabbed her in his arms, tilted her back, and kissed her.”

The girl turns out to be Virginia von Bierhart.

“Holy crap! Virginia von Bierhartg. Her dad owns the brewery. She’s the one who rode around naked on a horse and zaps around town in a black Corvette with a VVB license plate. The von Bierharts are royalty and Virginia the wildcat of the family.”

Both Virginia and Patrick believe the kiss was more than a mere pressing together of lips. It’s a melding of minds and souls.

“The answer was in her eyes: they were a couple. A strange circle was drawn around them and they were in it together, inside a calm, quiet, warm circle.”

The two are thrust into a comical but touching pseudo-Romeo and Juliet courtship, minus the poison and swordfights, but with plenty of false identities and subterfuge. Its ending will leave Patrick sad and somewhat wistful, but definitely a new man.

Thought some of the action may be different from that of the reader’s own adolescence (there’s a great deal of drinking and smoking by youngsters and the adults who know don’t disapprove but also join in), this is more or less a good depiction of what it meant to be a teenager in the ’70s . . . or any other time for that matter. There are the muscle cars, Tony’s Mom’s station wagon up there vying with the Trans-Ams, the Novas, and the Cougars, the questions of existence and purpose offset by the desire to simply have a good time. The inevitability of approaching adulthood and the becoming of those New Men before the chance to enjoy being the old ones has barely begun.

All in all, it’s a celebration of being young, and facing the future, ready or not.

Author Killeen states some of this story is autobiographical. If that’s the case, he certainly had a fun, if occasionally harried, adolescence. Most Improved Sophomore is an enjoyable feast of nostalgia coupled with the poignant joi de vivre of the teenaged male.

It would be very enlightening to have a sequel to this novel, in which we discover exactly how an adult Tony and Patrick fare, and if their somewhat feckless juvenile lives poured over into their grownup ones.