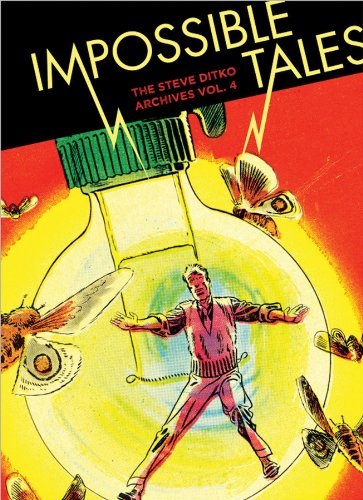 "This is a wildly entertaining collection of stories."

Steve Ditko would be in the Comic Art Hall of Fame simply for helping Stan Lee create Spider-Man and Dr. Strange. The art he drew, the character details, the layouts and the covers he did for Marvel in the early sixties became a legendary blueprint for those who would follow.

His style is incredibly unique. Mr. Ditko could make the teenage Peter Parker somersault across the page with the nimble agility of a ballet dancer. He could frame action with a level of excitement that few others could. His characters held expressive faces that could convey shock, teenage confusion, and distress all at once in one simple look.

When he worked on Dr. Strange he filled the world of the magician with images of space, time and the neverending eternity of the colorful cosmos. There was no limit to his imagination. By allowing it to run so free while at the same time keeping inside the conventions of comic storytelling, he became one of the greats who expanded the definition and role of what an artist was.

Impossible Tales: The Steve Ditko Archives Vol.4 gathers a year of his work from August of 1957 until July, 1958. It features pages in which, with the benefit of hindsight, you can see that his style is already nearly fully formed. Considering that he had turned pro only five years earlier, this is amazing work.

Prior to his work at Marvel, he was turning out an incredible number of pages for secondary publishers such as Charlton. The company paid very little but they provided steady work and generally left an artist alone. Mr. Ditko had a strong work ethic that fed into this system and his dedication to quality and his art led to a good number of very interesting stories. He had a very high batting average when it came to creating interesting art and challenging stories, many of which transported the reader.

The stories collected in this anthology vary from four pages to eight and cover science fiction, mystery, adventure, horror, and terror. Many of them would have been perfectly in place as scripts on The Twilight Zone, Boris Karloff Presents or The Alfred Hitchcock Hour. There are plenty of twists at the end, hidden morals inside much of the science fiction, and almost every one features everyday people dealing with something out of the ordinary.

When creating these tales Mr. Ditko worked from story outlines provided by writers from the Charlton offices. While many of them are of the time and occasionally hold a bit of misogyny or a patronizing attitude toward women, some of them contain a deeper meaning, maybe even a hidden message that we don’t normally associate with the era.

Through his art Mr. Ditko helps bring a new level of meaning to many of the tales. In The Menace of the Maple Leaves there are open declarations of environmental awareness inside the story. The splash page for the story shows us a man cringing in terror as leaves descend upon him. He shows us the scene from the perspective of the leaves as they fall from above. While the way that they are falling seems random, if you look closely Mr. Ditko gives the leaves a sense of organization that we may not perceive on the surface.

A “pig-headed greedy man” named Mike Stone comes to town and buys land that holds trees the resident consider off limits. Legend has that they have been blessed by a woman who was accused by the early settlers of working in black magic. Chased from the village proper, the trees gave her shelter before she inexplicably disappeared. Ever since then the trees have been protected by her.

When Stone attempt to chop them down a citizen remarks that he is “Chopping those trees blindly. Even the saplings. Not thinking once of conservation.” Ultimately the trees defend themselves from attack, taking Stone away. This is less than subtle message telling us that no matter what, nature will always win.

In another story an elderly couple moves into an ancient and dilapidated house. When they fix it up and show it the respect it deserves, the house rewards them with the return of their youth. Once again we see the idea of working with the environment.

Other stories hold allusions to Biblical ideas. One town sees a sleeping man predicts floods and locusts. These events come to pass sending the residents into a panic. Turns out it was all set up so the residents would leave town and crooks could rob a bank. Just as they crack the doors, an earthquake takes them into the earth.

Mr. Ditko’s visions of devastation and panic are central to the story, but it is the way he shows the faces of those in the town and the conniving, smug nature of the robbers that fuels the story.

This is the same insightful nature that he will bring to Spider-Man a few years later. Mr. Ditko is a master at combining the personal with the cosmic. You believe that something fantastic can happen to the people that populate his art because they are real.

As the years since this work was published have passed, Mr. Ditko has remained out of sight. He does not attend conventions nor has he been interviewed in decades. But he is not a recluse. He opposes the hoopla that surrounds his work on a philosophical ground. His art speaks for itself.

Editor Blake Bell addresses the artist’s evolution as both a philosopher and an artist in his insightful introduction, but the spotlight never moves from the beauty and wonder inside Mr. Ditko’s art. This is a wildly entertaining collection of stories that will delight fans of the artist as well as anyone who loves a great story.