An Impossible Dream: Reagan, Gorbachev, and a World Without the Bomb 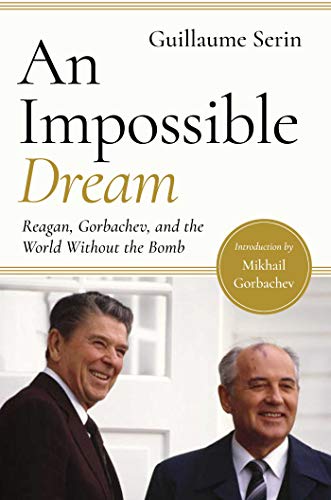 “If people read An Impossible Dream: Reagan, Gorbachev, and a World Without the Bomb and gather its deeper lessons, perhaps the race to Armageddon can be slowed if not stopped and reversed.”

Here is a reader-friendly book that provides much of the context for the arms control negotiations that helped to weaken the Cold War and halt it for a decade. The author, Guillaume Serina, is a French journalist based in Los Angeles. The book has been translated from the French by a journalist for The New York Times who has also written an interesting Afterword.

The book starts with insightful bios of presidents Ronald Reagan and Mikhail Gorbachev. It then reviews the Reagan-Gorbachev summit held in Geneva in 1985, not long after Gorbachev became General Secretary of the Communist Party.

Serina then focuses on the high hopes on both sides before the second summit, which took place in Reykjavik, Iceland in 1986. Having gained access to the notes taken by Jack Matlock, later the US ambassador to the USSR, and by an assistant to Gorbachev, Serina summarizes what each delegation expected and sought to achieve at the summit.

The documents show that Reagan and his advisers did not perceive the depth of Soviet opposition to Reagan’s pet project, the Strategic Defense Initiative, often referred to as “Star Wars.” Reagan’s resistance to any limitation on field testing of anti-ballistic missile defenses killed any prospect for a massive reduction of strategic weapons that he and Gorbachev saw as a step toward total nuclear disarmament. The Soviets clearly grasped that a meaningful anti-ballistic missile defense guarding the United States could nullify their own ability to deliver a second, retaliatory blow if the Americans launched a first-strike.  So intent were the Soviets on major cuts in the superpowers’ offensive weapons that they were willing to ignore the much smaller but still significant French and British nuclear forces.

Despite the collapse of the second summit, Gorbachev visited Washington in 1987 and signed with Reagan the Intermediate-Range Nuclear Forces Treaty, the first such measure that did not only limit but actually abolish up-to-date weapons of mass destruction. (Missiles were destroyed but not the nuclear warheads, which were removed and sometimes recycled in other weapons.) The Soviets led the West in some conventional as well as nuclear weaponry but were much weaker economically and in soft power.

Mikhail Gorbachev’s introduction to Serina’s book offers a succinct and basically accurate summary of the arms negotiations in the mid-1980s and some of the problems that persist to this day.

The Afterword by David Andelman recalls his conversation with Reagan’s Soviet specialist, Harvard historian Richard Pipes. Pipes confided that the SDI, whether it ever succeeded as a missile defense, was intended to bankrupt the USSR and threaten its survival. Some observers credit Reagan with achieving this goal, but it probably played only a supporting role. The top-down Soviet system was hopelessly inefficient.

This book’s treatment of many issues is marred by the author’s failure to master the realities of earlier agreements and the balance of forces in 1987. How the translator, a veteran journalist, could let these errors go unchecked is mystifying.

Serina in several places describes the ABM treaty signed by Richard Nixon and Leonid Brezhnev in 1972 as banning all ABM defenses. In reality it permitted each side to have two fixed, ground-based defense sites of 100 missile interceptors each—reduced in 1974 to one site each. Still, the ABM treaty was the sine qua non for limiting strategic offense weapons, because it left each side almost defenseless, so there was no point in adding to overkill.

Serina assumes that SALT II, signed in 1979 by Brezhnev and Jimmy Carter, went into effect. Owing to the Soviet invasion of Afghanistan, it was never ratified. For some years, however, both sides tried not to exceed its limits.

The author distorts the military realities that existed when the INF Treaty was signed in 1987. Serina says the Kremlin’s SS-20 missile aimed at Western Europe had a range of less than 65 miles, when its real range was 3,400 miles. He confuses it with other missiles based in Eastern Europe. The SS-20 (mobile and armed with three warheads) was always based in Soviet territory.

Serina implies that the two sides were roughly equal in intermediate-range missiles before the treaty and so had to make comparable sacrifices by eliminating them. In fact, the Soviets had deployed many times the number of intermediate- and medium-range missiles possessed by the Americans.

The United States began to produce and deploy such missiles only in response to the earlier Soviet buildup. The newly deployed US missiles were probably better but much fewer than the Soviet arsenal. So in 1987 Reagan sought and got a “zero-option” in INF. He even persuaded Gorbachev to eliminate the Soviet INF deployed in Asia, with no quid pro quo by China.

Further understating the Soviets’ concessions, Serina says almost nothing about the US and NATO forces untouched by the INF treaty. Besides the French and UK arsenals, there were NATO aircraft armed with nuclear weapons plus US aircraft carriers and submarines also armed with nuclear weapons, a far more lethal arsenal than anything the USSR could put at sea and keep there.

Like many other commentators, Serina assumes that the US legislature “ratifies” treaties. The Senate may advise and consent but the president “ratifies.”

To contextualize the “impossible dream,” Serina could have noted how Gorbachev’s key advisers turned against him and/or the Soviet system.  Gorbachev’s Foreign Minister Eduard Shevardnadze, honored in Washington for facilitating the unification of the two Germanys, resigned and went home to become president of Georgia. Roald Sagdeev, science adviser to Gorbachev, married the granddaughter of Dwight D. Eisenhower and moved to the United States in 1989 and became a professor at the University of Maryland.

A key adviser on glasnost’ and perestroika, Aleksandr Iakovlev used his access to Party archives to expose the crimes and corruption of previous Soviet leaders.  KGB head Viktor Chebrikov, worried that glasnost and perestroika were destroying he USSR, was fired by Gorbachev in 1988. Military adviser Sergei Akhromeyev, disturbed by the collapse of the institutions to which he had devoted his life, committed suicide after the attempted coup against Gorbachev in August 1991.

A book published in 2019 should bring the 1980s story up to date. Serina makes some effort to do so, summarizing Obama’s first-term commitments to a world without nuclear arms and the chaos introduced into world affairs by increased terrorism and hacking. But Serina misses some huge turning points.

In 2002 President George W. Bush abrogated the 1972–1974 ABM accords. American attempts to build an effective ABM defense still rankle the Kremlin and now China. Despite huge outlays for variants of the SDI, America’s anti-missile defenses are probably worthless. It is difficult to hit a bullet with a bullet—especially when the bullet arrives with a spray of decoys. The Pentagon investigates a space-based defense, but the practical and legal difficulties are formidable. None of these defense systems would stop a cruise missile fired from a submarine close to US shores or prevent some smaller nukes from being smuggled across the border in a truck or suitcase.

In recent months Presidents Trump and Putin have said they are abrogating the INF Treaty, each side accusing the other of violating its limitations. Trump, not averse to contradictions, continues to chuckle with Putin about alleged Russian interference in US elections.

This story reminds us how foolish have been the arms policies of presidents Ronald Reagan, George W. Bush, and Donald Trump—each at best a dilettante in military and diplomatic affairs, their whims and bad ideas filliped by unscrupulous advisers with a zero-sum mentality in dealing with competing powers. Though the book’s focus is on the three summit meetings between Reagan and Gorbachev in 1985, 1986, and 1987, the issues they negotiated and the accords they reached continue to reverberate on the global stage in 2019.

What seemed like an impossible dream—a world without nuclear arms—seemed close to being fulfilled when Reagan and Gorbachev met in Reykjavik in 1986. It was sabotaged by Reagan’s Strategic Defense Initiative that would shield the United States from an ICBM attack. If deployed, the SDI would violate the 1972–1974 ABM accords.

Then, as now, most scientists believed SDI was a pipe dream impossible to build and, if it did work, would compel the other side to build more weapons to pierce or get around the ABM shield. If the SDI proved workable, Reagan said he would share it with the USSR, but the Soviets did not trust this assurance. Gorbachev offered to let the Americans do “laboratory” testing of the SDI but wanted a commitment the Pentagon would not deploy it for at least ten years.

But Reagan wanted to be free, in effect, to violate the existing ABM treaty.  Insisting on a free hand for his SDI, he practically compelled the Soviets to back off from their own proposal for a 50 percent cut in all strategic nuclears. The Kremlin probably violated the ABM treaty by building a radar that could help protect the entire country, but tore down the facility when challenged by US observers.

Compounding this foolishness, after Bush abrogated the ABM treaty, the Pentagon began to develop and then deploy anti-missile missiles in Alaska and California, even though they usually failed when tested against a single incoming object.

Barack Obama reluctantly continued this deployment, which now worries the Chinese as well as the Russians because it might threaten their deterrent forces.  Obama and Trump also moved to put ABM defenses in Eastern Europe and perhaps the Mediterranean, ostensibly to thwart an Iranian attack on Europe. But the potential of these weapons, Moscow argues, violates the INF Treaty.

The American and Russian lemmings have blazed the path to disaster now being pursued by India, Pakistan, North Korea, and perhaps Iran—arguably freed from any obligation to put off going nuclear by Trump’s withdrawal from the Joint Comprehensive Plan of Action signed in 2015. The other nuclear power, Israel, was probably prudent to build a nuclear deterrent against its neighbors in earlier decades, but its intransigence toward the Palestinians undercuts any justification for its policies today.

If people read An Impossible Dream: Reagan, Gorbachev, and a World Without the Bomb and gather its deeper lessons, perhaps the race to Armageddon can be slowed if not stopped and reversed.