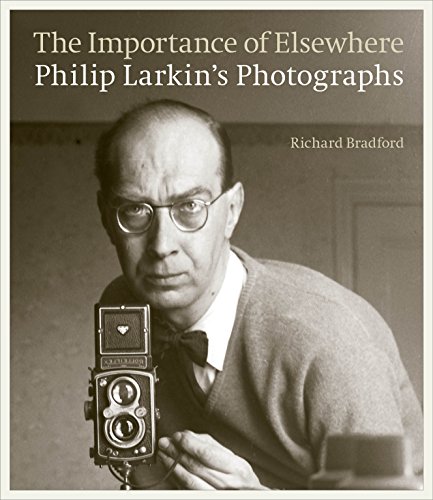 British poet Philip Larkin’s unconventional life and career is revealed in unique fashion in Richard Bradford’s The Importance of Elsewhere, a volume of photographs by the poet, who considered himself merely an amateur photographer.

Bradford’s previous biography of Larkin, The Odd Couple, focuses on the poet’s co-dependent friendship with literary rival novelist Kingsley Amis. Without doubt Larkin is a fascinating and eccentric figure as a celebrated poet, but he is otherwise a completely underappreciated photographer. The Elsewhere of the title alludes to Larkin’s compartmentalized and furtive life away from his public image.

Larkin photographed the houses at Oxford and his circle of schoolmates led by the celebrated novelist Kingsley Amis. He shot interiors and exteriors in natural light with specific cameras. His studies of post World War II bombed out towns, as well as his portraits of the many women in his life, and architecture in remote locales bear a haunted mystique. The book’s accompanying text by Bradford is alternately illuminating and sketchy. Only shards of Larkin’s poetry are laced throughout.

Bradford focuses more on Larkin’s private life than his literary career. His continued antagonistic bromance with Amis had darker aspects. Amis often boasted about having sex with girls as young as 14, for instance, and later boorishly flaunted his affairs with married women.

After Oxford, Larkin tried to establish himself as a writer, even collaborating on pulp potboilers inspired by fantasies characters based on their exploits. Meanwhile, the bookish Larkin had an active sex life and maintained a string of consensual open relationships with single and married women. His most enduring was with Monica Jones, whom Amis lividly disliked from the start for no stated reason, except maybe jealousy. Larkin tolerated him assassinating Monica’s character, but when she turned up in an unflattering characterization in one of Amis’ novels, Larkin had had enough.

At one point Larkin wrote to Jones, “I refuse to believe he can write a book on his own—at least a good one.” Jones became Larkin's literary confidante as he refined his crafts as a successful poet. Even though he had the public onus of being viewed as misogynist, a claim deduced from some of his poetry, Larkin’s letters to Monica acknowledge that he had a progressive view of gender roles as equal both sexually and emotionally.

Bradford writes vibrantly about post WWII England vis-à-vis Larkin’s gritty photographic studies of bombed out towns and hypnotic snapshots of a barely recovered post war culture. Bradford also assesses “Larkin’s growing sense of inadequacy as a writer.” And about his photography he deftly observes, “He would never take seriously any claim to being a photographic artist but, especially during these years of frustration as a novelist, he gained increasing satisfaction in capturing images from life without the assistance of words.”

Bradford adds, "Just as his poems began to say a great deal without seeming to tell us anything, so he was becoming equally entranced by the way that photography could capture a mood.”

Elsewhere will be of interest mainly to those who have previous knowledge about Larkin’s life and poetry. The book has a wonderful foreword by art photography curator Mark Hayworth Booth in which he discusses the various precision cameras Larkin used and the techniques he successfully mastered. The photographs are flawlessly transferred, many in plates at scale, in miniature format.