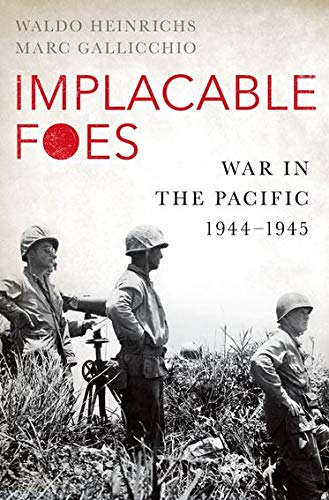 “a magnificent book that really fills in an overlooked period of World War II.”

The final year of the Pacific War is often highly compressed in military history books, especially that period between VE-Day in May 1945 and VJ-Day in August 1945. This new volume by Oxford University Press seeks to fill in this often overlooked period of time to provide a new and fascinating look at the crucial period of time when America transitioned from fighting a two-front war to defeating a fanatical and defiant foe.

What makes this book so outstanding is the authors have opened their aperture to provide not only a detailed and comprehensive battle narrative, drawing on many memoirs to bring the reader into the bloody and terrifying slog of combat against Japanese soldiers determined to die in battle, but a complete volume describing the political, strategic, logistical, and the all-important but often over-looked political factors driving America’s war against Japan in 1944–1945.

For readers who have studied World War II, particularly the Pacific War, this book provides considerable new and fresh material, and will in many ways change long-held beliefs and understandings of those crucial months in 1945 when the American military was preparing for what would have been the bloodiest campaign of all time, the invasion and occupation of Japan.

Two major themes really stand out: First, although the United States was at the zenith of its military power in 1945, it’s economic and military resources, and more importantly, its political will to sustain heavy casualties on both land and sea typified by the Okinawa campaign was in serious doubt. Second, now that the war in Europe had ended, many Americans were more concerned with returning America to a peacetime economy and beginning demobilization. Moreover, the destruction of Europe created a tremendous humanitarian problem that also stretched American resources as millions of starving and homeless Europeans looked to the United States for relief.

Against this backdrop, this volume overwhelmingly puts to rest the recurring myth that the Japanese were on the verge of surrendering and that the dropping of the atomic bombs was both unnecessary and motivated by any factor besides military necessity. Building on multiple previous works with detailed new research, the authors lay out a clear and irrefutable case that the Japanese government was willing to fight until the bitter end and was never considering surrender, regardless of civilian or military casualties.

In addition, the authors describe in great detail how the Japanese knew exactly where American forces were coming ashore on the island of Kyushu in the first phase of the invasion and had almost twice as many soldiers on the island than American intelligence assumed they would. These facts were known to American military planners due to code-breaking operations, and in fact, the authors describe in great detail the severe objections that the Navy had to the Army’s invasion plans.

In the end, the American decision to drop the atomic bombs was both a military necessity and the needed political push to allow the Emperor of Japan to overcome military obstructionism and accept the Allied surrender terms outlined in the Potsdam Declaration. Although the authors argue that the Japanese didn’t quite accept unconditional surrender in the same manner as the vanquished Germans, given the exhausted state of all the combatants by the fall of 1945, the surrender was enough to satisfy both the American public and the Japanese military that the war was over.

This is a magnificent book that really fills in an overlooked period of World War II.  American victory, while seemingly never in doubt, was nonetheless a very fragile victory, which could have been jeopardized had not the atomic bomb been available to provide the decisive edge and force the Japanese to come to terms.