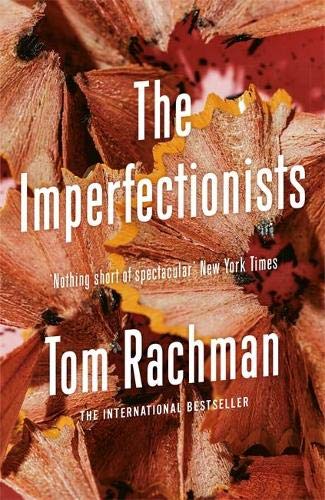 FIRST-TIME AUTHOR WRITES INSIDER’S VIEW OF NEWSPAPER BUSINESS would be the headline for The Imperfectionists, which begins each chapter with a different heading (some humorous and others matter-of-fact). This novel, written by Tom Rachman, gives readers the inside scoop on the people, places, and relationships at an imaginary, international, English-language newspaper based in Rome. The author has taken his experience and observations as a journalist, reporter, and editor at similar establishments to give us a realistic impression of the business and those that call it their profession.

This novel is essentially a collection of short stories, with each chapter focusing on a different character that is connected to the paper. Kathleen Solson is the Editor-In-Chief; Arthur Gopal, the obituary writer; Abbey Pinnola is the financial officer; Winston Cheung is an aspiring Cairo stringer; Lloyd Burko is an over the hill Paris freelancer; Oliver Ott is the clueluss young publisher; Dave Belling serves as copy editor; Ornella de Monterecchi is an out of touch, but devoted reader; Ms. Hardy Benjamin is the business writer; Ruby Zaga works as a copy editor; Herman Cohen (who is similar to the character of Lou Grant on the old “Lou Grant” show) is the corrections editor; and Craig Menzies fills out the group as the committed news editor.

With keen insight, Mr. Rachman takes us into the minds, self-doubts, and insecurities of the newspaper world, but finds it difficult to get underneath the characters’ skins. He provides the essentials of who, what, when, where, and why (like a good reporter), but tends to minimize the impact that events and relationships have upon the characters. It feels as if they are talking about or thinking of their lives, as opposed to being in them—the sense of being kicked in the gut or feeling the shattering of one’s dreams was sorely absent from the narrative, even in moments of intense loss or heartbreak.

When speaking about the home of the avid reader, Ornella de Monterecchi, the narrator says, “Which is best for this mistress, for Ornella’s home is a world where it is not possible to be good.” This line sums up another theme throughout this novel and that is that nothing ever works out for the good. Everything is doomed to fail, including relationships, marriages, dreams, and the news business. Like the stories they cover: all is viewed as negative and hopeless. Just when you think one of the stories is going to have a “happy ending” or conclusion, you are hit in the face with an unexpected turn of events or unsatisfying finale. Happiness or satisfaction with one’s life is portrayed as vain or self-indulgent. This sense is captured cleverly in the words of a once highly regarded feminist who is dying and being interviewed by Arthur Gopal. In reference to speaking about her life and having it published in her obit, she states, “It extends the lease on my illusions.”

The Imperfectionists is a good book if you wish to know more about the inner workings of putting out a newspaper and the ongoing challenges being faced in the news-publishing world. There is also an interesting and well-crafted beginning and end. If you wish to read something that has more of an emotional punch, however, you may want to pick up another novel—one that doesn’t sound as much like one newspaper story after another.