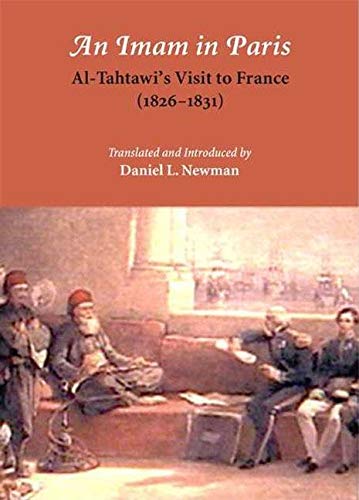 “For readers interested in early encounters between European and Arabic culture, An Imam in Paris: Al-Tahtawi’s Visit to France (1826–1831) provides a fascinating glimpse into the life and thoughts of one man who recorded Parisian life around the time that Orientalism firmly captured the imagination of Europeans.”

Rare is the native English speaker who reads and writes Arabic, classical or otherwise. And thus a vast body of literary work lies inaccessible to those who desire to increase their understanding and appreciation of the Arabic-speaking world. Because there is this hole in the material available to scholars and others, the scholarship of much of Europe’s past likely could be construed as being incomplete or even erroneous.

That’s why it’s necessary to herald the appearance of works like An Imam in Paris: Al-Tahtawi’s Visit to France (1826–1831) by Rifa’a Rafi’ al-Tahtawi, translated and introduced by professor Daniel L. Newman of the University of Durham.

Mr. Al-Tahtawi’s journal, which he kept at the behest of his teacher Hassan al-Attar, is one of the few early and comprehensive accounts of European society written by an Arab. Shortly after its publication in Arabic, a Turkish translation appeared and became a bestseller throughout the Ottoman Empire.

Mr. Newman dubs the work “descriptive,” because it does just that: Mr. al-Tahtawi describes what he sees in that land of infidels. But he also passes judgment, especially on poor French people, whom he calls “riffraff.”

Chosen by Mamlūk ruler, Muhammed’ Ali, the former Albanian mercenary who rebuffed French efforts to colonize Egypt, the young Islamic scholar al-Tahtawi joined a group of students sent to France to study modern sciences and French military techniques and tactics. Most of the students called themselves Muslims, although four professed the Christian faith. They sailed on a French ship, La Truite, and landed in Marseilles May 15, 1826. None of them could speak a word of French.

And so, at the age of 24, Mr. al-Tahtawi found himself in the France of the Enlightenment, where inherited belief gave way to a system of questioning, observation, and investigation. In other words, a place where the divine right of kings and rulers of every stripe no longer held their subjects down with the grip of an iron fist.

Mr. al-Tahtawi soon learned French well and translated works like François de Salignac de la Mothe-Fénelon’s Les Aventures de Télémaque, the first Greek myth to be translated into Arabic. The significance of this work is due to the fact that it basically served as a “guide for good,” one of the “Mirrors for Princes” so popular at the time, meant to educated future kings, in this case the grandson of Louis XIV. But also of interest to the ruler Muhammed Ali, Mr. al-Tahtawi’s patron.

And in Paris, a place where people lived very differently from the Egyptian court of Muhammed Ali, Mr. al-Tahtawi took up his pen and opened his eyes, but only so far. Nonetheless, Mr. al-Tahtawi cannot be considered an impartial observer, for he emphatically stated that he would only include things that fell under the rules of Islamic law: “Naturally, I shall approve only that which does not run counter to the prescriptions of Muhammedan law … .”

Mr. al-Tahtawi’s expertise and experience eventually helped to modernize that Egypt, although he never separated himself from the tenets of Islam nor did he wholeheartedly embrace French culture. As Mr. Newman says the preface to An Imam in Paris: Al-Tahtawi’s Visit to France (1826–1831),

“Time and again, I was struck by the huge importance of Mr. al-Tahtawi’s book to modern Arabic literature and the development of modern Arab political and social thought, as well as its essential value as a source for any historical study in the field of Muslim Alterist discourse. Furthermore, the author [al-Tahtawi] is inextricably linked with the cultural Renaissance (nahda) of Egypt, in which he was one of its driving forces, and has rightly been called the father of Egyptian nationalism and of modern Islamic educational thought, as well as being one of the forerunners of modern Arab historiography.”

Mr. al-Tahtawi’s on-the-spot, you-are-there observations of Paris, “the bride among all regions,” revealed his grudging admiration for the French and their way of life. He describes everything, from libraries to women to clothing to constitutional government. Of the latter, he wrote a great deal and influenced Egyptian thought deeply on the subject. Of particular interest was his description of newspapers and their significance. According to Eugene Rogan, director of the Middle East Center at Oxford University, there were no newspapers in the Arab world at the time.

”Despite their expertise with regard to food and pastry, etc., their food lacks flavour and, with the exception of peaches, the fruit in this city has no real sweetness.” Contrast this with Paris’s impact on the Americans, Benjamin Franklin, and Thomas Jefferson, not too long before Mr. al-Tahtawi’s stay in the city.

In the end, Mr. al-Tahtawi attempts to draw parallels between the French sense of honor with that of the Arabs. He sums up this most compelling book by saying, “In any case, I should like to ask anybody who looks at this book to read it carefully in its entirety so as to gain an insight into the things it contains. He [sic] who peruses the book will more clearly see where its failings lie. I, for my part, can only quote the words of the poet:

Here you have something embroidered
on paper, by a man with little talent
Try to hide the defect when it appears—as God forgives many sins!”

For readers interested in early encounters between European and Arabic culture, An Imam in Paris: Al-Tahtawi’s Visit to France (1826–1831) provides a fascinating glimpse into the life and thoughts of one man who recorded Parisian life around the time that Orientalism firmly captured the imagination of Europeans.