I'm Fine and Neither Are You: A Novel 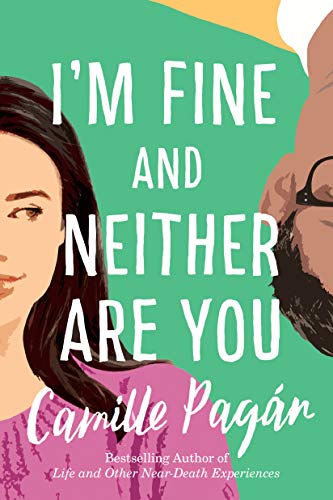 “Matt's eyes were on me, but he was still looking right through me. ‘I think she's dead.’”

Penelope Ruiz-Kar, aka Penny, has a busy life. Wife to Sanjay, mother to daughter Stevie and son Miles, and employed in development at a Midwestern University, she is carrying the world on her shoulders. All she would like to do is escape, to run away from the stress of everything. She is starting to resent Sanjay, who is a stay-at-home dad, though he doesn't do much in the way of domestic chores while he is allegedly writing his bestseller.

The only outlet Penny finds is with her closest friend, Jenny Sweet. Jenny is the gal who has it all . . . an adoring husband who earns enough so she doesn't have to work, though she has a blog that has brought her fame and wealth. She owns a gorgeous, immaculate home, and has the perfect daughter, a little younger than Miles. Jenny is one Penny can talk to, who understands her, and who advises her. Constantly texting back and forth each day, Jenny often responds to Penny's woes with: "If you're not happy, make a change."

Caught up at work one day, Sanjay phones Penny to remind her to pick up the kids at camp. Knowing she's late, she calls Jenny to ask her to get them, but Jenny doesn't answer. When she goes to her car, it is gone. She remembers her hectic morning trying to arrive on time and not finding a slot open she parked at the electric-car charging station only to realize now the vehicle car was towed.

In a dilemma, she asks her colleague Russ for help. He obliges by getting the children, Penny's as well as Jenny's Cecily, and drives them to Jenny's home. Penny spots Jenny's car in the drive then notices Matt, her husband, pulling up.

Penny, Matt, and the kids go into the house and the children scatter to the kitchen for treats.

"Matt was at the foot of the stairs. The expression on his face instantly reminded me of the blank stare Miles wore when he was sleepwalking and was seconds from mistaking a corner in my bedroom for a urinal.'

"'Are you okay?' I asked. Stupidly—it was clear he was not.

"'No.' He was holding his phone out toward me. I could hear that someone on the other end was speaking, though I could not decipher what they were saying.

"The fine hairs on the nape of my neck were still standing at attention. 'What is it?'

"Stop there, I thought. Don't let your beautiful mouth utter another word. Let's  have one more minute where life is what I believe it to be and everything is fine. And yet, I said, 'What about her?'

"Matt's eyes were on me, but he was still looking right through me. 'I think she's dead.'"

How could this be? How could her best friend, her confidante, be dead? Matt insists Penny go check upstairs in her study, where she notices Jenny sprawled at her desk, most assuredly no longer alive. When he intimates Jenny has had a problem with painkillers and she must have taken too many, Penny cannot comprehend this. How could Jenny be on drugs and she not know? Didn't they share everything? Could it be possible that Jenny's "perfect life" wasn't so perfect after all?

As Penny rationalizes this horrific situation, she descends into a state of depression. Her main concern is for Cecily and how she will now cope without a mom. She knows only too well how heartbreaking it can be growing up motherless, and she tries in every way to prevent the child from suffering this tremendous loss.

Jenny's death also brings up questions about her own life, her marriage, and her career. She's given so much of herself, but what has she gotten in return? In her mind, she still hears Jenny talking to her telling her be more assertive and caring about herself.

A tale of friendship, this novel offers insight into the complexities of women's lives and how one woman learns to deal with it through the pain of loss and heartache and come out on top.