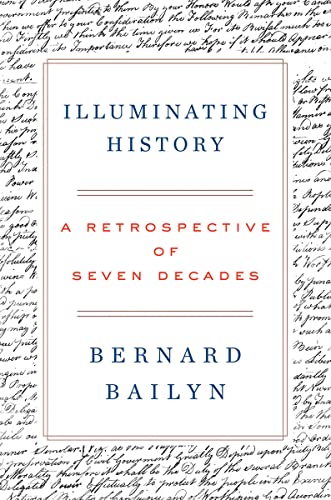 “Historians build on the research of their predecessors in the field, and no one could be a better guide than Professor Bailyn.”

Researching and writing history can be a great adventure. Searching for sources can be like panning for gold.  You never know which pan will contain a nugget until you sift out the sand and dirt. Occasionally, you find a treasure. Archives are filled with potential gems, enough to satisfy the most eager history hunter.

Bernard Bailyn is the Adams University Professor and James Duncan Philips Professor of Early American History, Emeritus, at Harvard University. By any measure, he is an extraordinary historian with a distinguished academic career. His books on pre-Revolutionary War America are the definitive works in the field. Bailyn has mined the archives. In Illuminating History he explains how he found the golden nuggets and used them over seven decades of scholarship.

Bailyn focuses on the daily lives of ordinary colonists, the hardest part of history to write. He offers some examples. Bailyn found some gold in the last will and testament of Robert Keayne, a wealthy Boston clothier of the 17th century. The legal documents provide detail and narrative, becoming an autobiography filled with personal philosophy and partisan tales. Keayne even has the last say on the “scandal” of 1639, which combined religious theology and commercial dealings. Bailyn came to his project deeply steeped in the literature of Puritanism. With Keayne’s will in hand, Bailyn’s 1955 book, New England Merchants in the Seventeenth Century, became a classic in the field.

How can you reconstruct the family life of the American colonists? Secondary sources are rare in the field and insufficiently probative. Bailyn often had to be creative. He used contemporary data from Europe of extended 18th century families combined with a census analysis of Andover, Massachusetts. The clever extrapolation resulted in his 1960 book, Education in the Forming of American Society.

Bailyn holds an aversion toward historians who fill their works with fictional dialogue. Of course, no historian knows what the inhabitants of 17th century New England said to one another. Historians count on their reader’s trust in the accuracy of their work. Fictionalized conversations diminish their credence.

Over his career, Bailyn found much bullion in newspapers. Today this work is made much easier by the internet where storehouses of newspapers and magazines can be accessed online. Newspapers then (and now) addressed the events of the day from a partisan point of view. A good historian would not rely on one version of events.

In the penultimate chapter, Bailyn explains how today’s great academic historians can broaden the community of scholars by institutionalizing the interchange of ideas. The Atlantic History Seminar was held annually from 1995–2010 mostly at Harvard, but also at academic settings across Europe. The assemblage brought together senior and junior historians to foster exchanges of, and responses to, papers on predetermined topics. The product of this gold panning was a notable remaking of the field that can only be assessed decades from now when the generation of junior scholars achieves senior status.

At this stage of his remarkable career, Bernard Bailyn has written a book to guide the historians who will write the next Pulitzer Prize works in the field. (Bailyn himself has won two of those splendid Prizes.) Historians build on the research of their predecessors in the field, and no one could be a better guide than Professor Bailyn.