In the Illuminated Dark: Selected Poems of Tuvia Ruebner 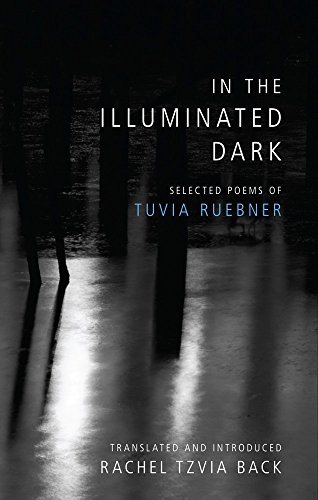 “The poems in this selection written in Tuvia Ruebner’s ninth decade show no decline in the power and skill he demonstrated earlier. At 90 he is still writing . . .”

At 90 Tuvia Ruebner is probably the preeminent living Israeli poet you’ve never heard of. The author of 15 books of poetry and a winner of Israel’s prestigious Prime Minister’s Prize, Ruebner’s books of original poetry (and his translations in both directions between German and Hebrew) are better known in Germany and continental Europe than in the United States, Britain, and the commonwealth.

Unlike other Israeli poets of his generation Ruebner came to Hebrew poetry via German rather than British and American poetry, and the second strike against him was that his mentor and champion was Leah Goldberg (who came to Hebrew poetry via Russian poetry) rather than the well connected and influential Natan Alterman whose proteges included Yehuda Amichai, Natan Zach, the American-Israeli poet T. Carmi, and Ruebner’s friend and fellow Holocaust survivor Dan Pagis. Apart from Pagis’ minimalism, Ruebner’s lyrical voice is neither heroic nor nationalistic unlike such survivor poets as Amir Gilboa and Abba Kovner. Like all the poets mentioned in this paragraph Roebner’s poetry is strongly influenced by the Hebrew Bible.

But an artist’s initial influences do not necessarily predict where (s)he will end up. Ruebner’s earliest influence was the German poet Rainer Maria Rilke, but in “Guide for a Young Poet” (2002) he contradicts Rilke’s advice in Letters to a Young Poet and prescribes perspiration rather than inspiration.

Nor is Ruebner ignorant of English poetry. In “A Postcard from Tel Aviv” (1999) he paraphrases lines from T.S. Eliot’s “The Love Song of J. Alfred Prufrock,” and his description of Breughel’s painting “The Fall of Icarus” in “The Fall” (1982) echoes W. H. Auden’s poem “Musée des Beaux Arts.”

Anglophone readers (especially those who also read Hebrew) will find both this handsome book’s bilingual presentation of Ruebner’s selected poems, and his heart wrenching backstory described by translator Rachel Tzvia Back in her informative introduction and endnotes, compelling reading.

Ruebner was born and raised in a “semi-secular” German speaking Jewish family in Bratislava, Slovakia. In 1939 at age 15 after completing 9th grade Ruebner’s formal education was ended by Slovakia’s racial laws, which expelled Jewish students from the country’s schools. At the time Ruebner’s father was planning to move the family to Palestine, but the outbreak of World War II made that impossible.

Membership in the Socialist-Zionist youth movement Hashomer Hatzair enabled Ruebner and seven other Bratislava Jewish 17 year olds to emigrate overland to Palestine in April 1941 leaving behind his parents and his beloved 13-year-old sister Litzi (to whom this book is dedicated) who 14 months later were deported to Auschwitz and murdered.

In Palestine Ruebner was sent to Kibbutz Merchava in the Jezreel Valley where he still lives today. During the Independence War he was wounded early and after recovering was stationed in the ruins of an Arab town whose inhabitants were forcibly relocated to the nearby Arab city Nazareth (an example of internal displacement) and whose farmlands were divided among the neighboring Kibbutzim.

As a victim of ethnic cleansing Ruebner did not approve of the practice, which led to feelings of ambivalence about the country that rescued him. In “Victim Again” (2002) he blames both sides of the Israel-Palestine conflict: “A victim begets a victimizer, a victimizer begets a knife/a knife begets fear, fear/begets hatred, hatred—wickedness” The poem concludes “Fear and hatred and hatred and fear/contempt of hatred and fear//How do we end that which has no end?”

Ruebener’s first wife Ada was also a German speaking Slovakian, and during his first dozen years in Palestine/Israel he wrote poetry in German. In 1949 he and Ada were in a bus accident that took her life. While recovering in hospital he dictated his first Hebrew poem to Leah Goldberg.

In 1953 Ruebner married his second wife Galila, a native Hebrew speaker who spoke no German, and switched to writing poetry in Hebrew. Thirty years later his youngest son Moran, who had just completed his army service fighting in Israel’s first Lebanon war, announced to his parents that he was leaving for a trip to South America, and they should not try to contact him. He was never heard from again.

The losses of his parents, Litzi, Ada, and Moran cast shadows over his entire oeuvre, which includes autobiographical, travel, nature, ekphrastic (describing works of visual art), and protest poems. The title of the book comes from the fourth line in his poem “The Sword” (1967):

“The crystal voice of evening.

With sword in its hand

in the illuminated dark

the contours of a face that you loved.

The sword turns and twists in the living flesh.”

Hebrew draws a far sharper distinction than does English between literary and colloquial language, and Ruebner juxtaposes literary vocabulary with colloquial idioms in a manner that is unmistakably modern.  Kudos to translator Back for finding equivalent English idioms as in these lines from “History” (2002): “Shame? History asks in wonder. Never heard of it./Accountability? Forget it, pathetic.”

Ruebner’s Hebrew verse is highly mellifluous, and Back’s English versions are admirable, though it is nearly impossible for any translation to convey both the music and the meaning of the original. Sometimes she adds or subtracts a word to and from the Hebrew or takes other liberties for the sake of the poem she is recreating in English.

The poems in this selection written in Tuvia Ruebner’s ninth decade show no decline in the power and skill he demonstrated earlier. At 90 he is still writing but has announced that whatever he writes from this point forward will be published posthumously. For posterity’s sake let’s wish him, as they say in Israel, May you live until 120!