The Illicit Happiness of Other People: A Novel 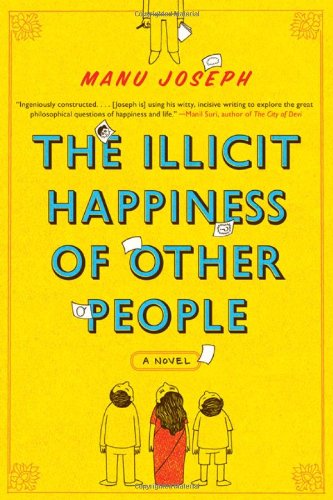 Manu Joseph’s perfectly named novel, The Illicit Happiness of Other People, is both a terribly funny and deeply sad story of a father’s quest for the reason behind his 17-year-old son’s suicide.

This beautifully written work is all at once a philosophical and psychological inquiry, a study of family dynamics, a mystery, and a story of how we construct identities and narratives.

The Illicit Happiness of Other People, which takes place mostly in Madras, India, relates the story of the Chacko family. Ousep Chacko, the father, is an alcoholic, failed novelist, and ungainfully employed journalist who spends much of his time obsessively seeking answers about his son Unni’s suicide three years earlier.

His wife Mariamma, traumatized by an earlier event in her adolescence and coping with her elder son’s death and drunk, unreliable husband, has frequent breakdowns and talks to the walls.

Their surviving younger son, Thoma, is trying to grow up and make sense of his less-than-functional family. Each, in his or her own way, is trying to find out who Unni was and why he killed himself.

The narrator explains Unni and his comic strip: “Seeing corpses in their coffins probably inspired his longest work, The Album of the Dead. As it progressed he showed it to several friends, who were disturbed by his idea of humour. In the Album, he imagined family, friends and other familiar people dead in their coffins. Every person has a whole vertical page, and there are thirty-two caricatures in all, including a self-portrait.”

The Illicit Happiness of Others includes numerous detailed verbal descriptions of Unni’s visual art, in essence creating its own comics, honoring comics as an art form, and constructing stories within stories.

In addition to looking for clues in Unni’s comics, Ousep relentlessly hounds Unni’s friends hoping to extract more information about his son. The novel functions much like a mystery that paradoxically questions whether what Ousep is seeking, namely the cause of Unni’s suicide and Unni’s identity, exist.

Many of the friends and acquaintances whom Ousep interviews provide him with clues or bits of information and send him in pursuit of other people who may provide further evidence. Each one warns Ousep that he or she does not “know why Unni did what he did.”

The Illicit Happiness of Others is an exceptionally well-written work. It is cleverly organized and engaging. Manu Joseph’s prose is clear, wry, dry and witty.

Despite telling a disturbing story, the narrative maintains an ironic distance from the characters and is funny. One friend of Unni’s is described: “Sai stands in his spineless way, young but antiquated, studious but not clever, a thick steel watch on his wrist, his oiled black hair combed in the good-boy hairstyle. He looks like the past of an old man.” Another friend of Unni’s parents are portrayed: “They stand with their elbows on the short iron gate, and wait for him to arrive. Somen’s father is bare chested, his mother is in a sari. Ousep can see their bellies. And their deep navels that gape at him as if they are the alert eyes of a long, indestructible tropical marriage.”

Both the content and writing style of The Illicit Happiness of Other People are reminiscent of many of the works of Haruki Murakami. Both combine quirky characters and situations, humor, mysteries, wild goose chases, and philosophical and psychological theories into entertaining, yet thought provoking, insightful novels. Manu Joseph’s work The Illicit Happiness of Other People may not bring you true happiness, but it will make you smile and even laugh—and it’s definitely legal.