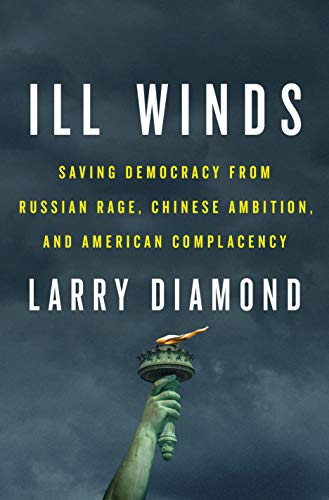 “Democracy in the United States as well as many other countries is also threatened by the corruption fostered by kleptocracy. Time will tell whether reformers in the US government and other institutions will “clean the swamp” or be drowned by it.”

For anyone who wishes to understand the perils to democracy, in the US and worldwide, this book provides a reliable and quite readable instruction manual. The title says it all: There are ill winds blowing worldwide that bode poorly for democratic freedoms. Inside and next to the former Soviet Union, Vladimir Putin’s Russia rages at all those who have weakened or challenged the Kremlin and its imperial rule.

Alongside Russia, the government and many inhabitants of world’s most populous country crave to restore the glory and power of an imagined Middle Kingdom. Not much concerned about challenges to their unipolar comforts, many Americans want to Make Their Country Great Again but are loath to pull in their belts and roll up their sleeves to do so. Like those depicted by Dostoevsky’s chapter on the Grand Inquisitor, many Americans prefer bread and security to freedom.

Democracy, science, and technology have flourished in the West, thanks to three revolutions initiated by reformers such as John Wyclif, Jan Hus, and Martin Luther more than five centuries ago: mass literacy, free thought, and respect for individual dignity.

The rulers of Russia and China have embraced and largely achieved mass literacy, but they have eschewed free thought and concern for individual dignity. The founders of the United States and many of its movers and shakers over the centuries absorbed and benefited from the three revolutions, but American culture has lost much of its former élan.

Stanford professor Larry Diamond, co-editor of the Journal of Democracy, depicts the big picture in Russia, China, and the United States and illustrates it with telling details; he enlarges that picture with snapshots of life in other countries, such as Hungary, Thailand, and  the Philippines,  where he has talked with those who suffer from government repression as well as some of the repressors.

Diamond calls for a resurgence of US leadership in world affairs. If Americans do not act to defend and spread democratic ideals, today’s authoritarian wave could become a tsunami, providing opportunities for Putin, Xi Jinping, and their admirers to usher in an era of surging authoritarianism. President Trump’s policies have been a gift to the authoritarian rulers of China, Russia, and other countries, undermining the foundations of a liberal world order that took shape in the aftermath of World War II.

Diamond lists many progressive reforms that could be implemented even while Donald Trump occupies the White House, such as reducing gerrymandering and adopting ranked-choice voting. But all reforms confront the momentous power of social media, where more than half the US population gets its news.

To make matters worse, many young people cannot distinguish an ad from a news item, and many have no idea how to assess the reliability of an Internet source. Many people who don’t like the president chosen by the electoral college in 2016 do not bother to vote or are thwarted by registration laws designed to disenfranchise potential Democratic voters.

Democracy in the United States as well as many other countries is also threatened by the corruption fostered by kleptocracy. Time will tell whether reformers in the US government and other institutions will “clean the swamp” or be drowned by it.