I'll Take What She Has: A Novel 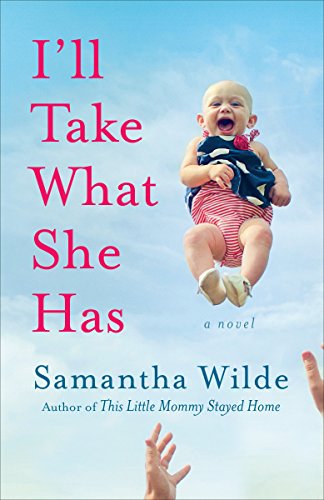 Annie and Nora have been best friends since preschool, sharing the highs and lows of life and love as mutual and perpetual outsiders.

Now that they’re adults, friendship has become more difficult. They live and work at the same private high school, and their insecurities are pulling them apart.

Nora, the shy, people pleaser envies Annie her brashness, the love of her husband, and her two unplanned children. Annie, in turn, envies Nora’s freedom while harboring suspicion that she herself is not the mother she’d like to be.

Both come from challenging family situations, the effects of which linger and are poisoning their relationships. As their conflict comes to a head, they individually develop a fascination for the gorgeous, wealthy Cynthia, new wife of a fellow faculty member—who happens to be Nora’s ex.

In I’ll Take What She Has, Samantha Wilde tries to put her own stamp on the contentious topic of the woman who tries to have it all. The author writes clearly and well, with competent prose, creating middle-class woman with serious envy issues.

The trouble is no one would want to know these whiny, self-absorbed women.

Nora’s strife comes from having not conceived with the husband she admits she probably only married so she could have a baby. Given that she is in her mid thirties, just off birth control, and trying to conceive for only a year, it seems difficult to believe that her struggle could cause her that much strife. Her constant declarations of her own plainness and clumsiness were off-putting. Nora’s conciliatory tone and desperate need to be liked by Cynthia, the queen bee of their campus, is even more off-putting.

Annie is no better. She disparages Nora, despite their long friendship, and is disdainful of nearly every other character. Again we get a familiar litany of complaints: “I’m poor, I’m fat, and I have no friends.” It’s not at all unbelievable that she would be alone. She’s sour, and though she declares great affection for her husband and children, it’s demonstrated by disregard of his feelings and indulgent parenting.

Though she visits a therapist periodically throughout the novel (the book’s best scenes), the questions and observation that start out sharp and insightful devolve into tired pop-psych blurbs about nurturing Annie’s inner child and how her parents’ divorce was responsible for the person she’s become.

Troubling, too, is the strange subtext on working mothers and childrearing. Annie is adamant that women with children who don’t have to work should not; it is clear that this belief was created to highlight the true ambivalence she feels about being a full-time mother that lies behind her stridency.

By the end of the story, though, all of the “good” characters have embraced Annie’s point of view, while the “bad” characters are working and using child care.

It leaves a bad taste in the mouth when a novelist once again pits women against each other in this arena, and clearly delineating one choice as bad and one as good. Though there is lip service paid to the notion that women should support each other’s choices, the eventual outcome points to one option over the other.

These issues would not be especially problematic from a narrative point of view if there was any character growth in the course of the story, or even a defiant refusal to change a là the protagonist in Lara Santoro’s brilliant The Boy.

The trouble is that I’ll Take What She Has is wrapped up in a cutesy ending, each woman getting what they want without the characters having learned anything.

Few of the root causes of Nora and Annie’s angst are resolved—neither Nora’s self-hatred nor Annie’s anger are even touched. It’s not necessary that the reader like characters in novels, but it is mandatory for characters to engage the reader on some level. It just doesn’t happen here. They learn little, change little, and are sour and whiny all the while.

Norah and Annie’s problems, though familiar to many women, are inflated so much and the few solutions they find ring so unrealistic that these characters become caricatures.

I’ll Take What She Has is a love song to self-absorption. Watching otherwise intelligent, entitled women insult themselves and tear into each other and their significant others was neither pleasant nor believable.

Why their significant others bother to come home each day is a mystery.

Near the end of the novel, Nora’s visiting cousin had the most telling line in the entire book: “Close down your pity party! It’s time to go home. Some of us have really hard lives, instead of your made up troubles.”

That pretty much says it all.