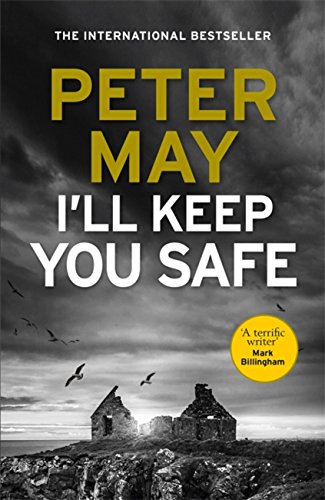 “No one can create a more eloquently written suspense novel than Peter May.”

A fast-paced thriller that is a lyrical masterpiece that only Peter May can create, I’ll Keep You Safe is story of love, revenge, dysfunctional families, overwhelming grief, and the feeling of helplessness that it causes, set against the background of the Hebrides.

Ruairidh and Niamh Macfarlane are childhood sweethearts, are married, and are also business partners in a small Hebridean company that produces Ranish Tweed, similar to Harris Tweed, but more pliable.

After years of barely scratching a living, Ruairidh and Niamh are now prosperous, their Ranish Tweed in great demand among the world’s most famous fashion houses.  A wonderful future is within reach as they travel to Paris to an exposition to sell their tweed.

That wonderful future that seemed so close just a few weeks before is in doubt. Niamh receives a text message from an anonymous caller informing her that Ruairidh is having an affair with Irina, a fashion designer. ”The change in a relationship happens slowly, without you really noticing at first. Like the transition between spring and summer, or summer and autumn. And suddenly it’s winter.”

That is how Niamh feels about her relationship with her husband. Although their marriage isn’t in the winter season, “. . . there was a chill in the air which seemed to presage the plunge of Arctic air to come.”

Niamh confronts Ruairidh with her suspicions. He denies it, then leaves their hotel room with a flimsy excuse to meet Irina. Enraged, Niamh follows and sees Ruairidh climb into Irina’s car. Shortly afterward, as she chases after the car, a tragedy occurs, one she did not foresee.

“She can make out the skeleton of the car beyond the blaze, imagining that she sees the silhouettes of the driver and passenger still strapped in their seats. But how could anyone have survived such an explosion intact?”

Niamh is questioned by the Parisian police, and is told that since terrorism has been ruled out, the car blast that killed Ruairidh and Irina is now considered a homicide, and she a suspect.

Enveloped in a fog of grief Niamh is hardly able to understand the police officer. How can she be a suspect? She loved Ruairidh, and besides, doesn’t know how to make a bomb, couldn’t if her life depended on it.

Finally released by the police, but considered a material witness and not allowed to leave France, Niamh is contacted by Irina’s brother, Dimitri, who is certain his sister and Ruairidh were killed by Irina’s husband. “Georgy is a brute of a man . . . I have never known a man so jealous.  God help her if she ever tried to leave him.”

Georgy seems like a good suspect to Niamh as well as to the police, but the Russian has vanished. The police officer in charge of the investigation, Sylvie Braque, and her team search Irina’s apartment, but only deduce that Georgy left in a hurry, packing very little.

Niamh is followed as she walks back to her hotel after leaving the police station with Dimitri. It is too dark to identify her follower. Returning to her hotel room she searches Ruairidh’s briefcase and finds reservations at a posh restaurant for their 10th wedding anniversary. “Why would he bother with such an elaborate surprise for their tenth wedding anniversary if he was having an affair with Irina Vetrov?” It doesn’t make sense.

Finally Naimh cries for the first time. “Tears tore from her reluctance to accept that he really was gone, and the knowledge that nothing could bring him back.”

When Naimh is allowed to leave Paris, she takes a small box home to the Hebridean island where she will now live alone. The small box contains all that remains of her husband.

She dreads meeting with both Ruairidh’s parents and her own. Her in-laws dislike her, and her own parents, particularly her mother, are resentful that she married Ruairidh. Both sets of parents have disliked one another for nearly as long as Naimh can remember.

May’s characterizations of the mother and the mother-in-law reveal two bitter, resentful women who have little real reason for their actions toward Naimh except their own innate personalities and a feud between the families over the death of Naimh’s brother, Uilleam years before.

Seonag, Naimh’s best friend and an employee of Ranish Tweed tries to comfort her, but Seonag’s attempts to come between Naimh and Ruairidh when all were young is a memory that won’t quite go away. “And if she couldn’t exactly forgive her friend, she no longer blamed her.”

The past lingers over Naimh’s presence as May uses a series of intermittent flashbacks to illuminate the events that mark her life: Uilleam’s death and the feud it caused; the quarrel with Ranish Tweed first important client; her near tragic accident from which Ruairidh saved her.

Suspense increases as Naimh becomes convinced that someone is trying to kill her, and on one occasion, nearly succeeds. She struggles to understand what possible motive someone might have, but the answer eludes her. As with any good thriller, the identity of the murderer is unexpected as May introduces a plot twist few readers will expect.

No one can create a more eloquently written suspense novel than Peter May. His prose evokes a setting that is almost mystical in its untamed beauty. While the conclusion to the novel is just slightly unbelievable, it is a conclusion most readers have secretly hoped for.