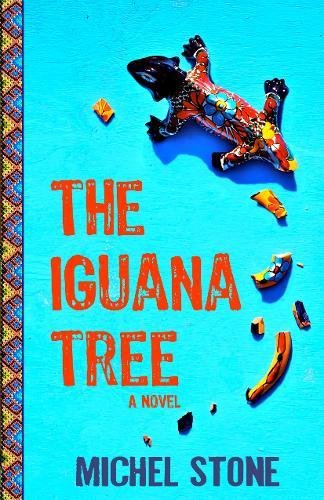 “The Iguana Tree is a triumph—an enjoyable and informative story on an important topic. Ms. Stone has found a compelling realistic fiction voice and established herself as an author to watch.”

Hector and Lilia hail from the little town of Puerto Isadore in southern Mexico. They are poor, but not miserable. They’re very much in love with each other, and they are loving parents to their baby.

Hector longs to provide a better future for his family. So he undertakes a harrowing journey north into the United States to find better work. After her grandmother dies, Lilia’s roots in Puerto Isadore are severed, so she and her baby undertake an even more harrowing journey north to find Hector. After enduring heart-wrenching hardship (specifics not offered to preserve the book’s suspense), Hector and Lilia are reunited. But the price of reconnecting in the U.S. is shockingly high: They’ve lost their baby, their innocence, and their love for each other.

Michel Stone’s The Iguana Tree is the story of Hector, Lilia, and the shadowy world of illegal immigration. Drawn from interviews with recent illegal immigrants, the book takes the American reader to places never seen by gringos: secret compartments within cargo trucks, squalid safe houses, and detention centers for captured illegal immigrants.

Ms. Stone writes fiction with the authenticity of an investigative journalist. If “60 Minutes” was profiling an illegal immigrant couple and their travails, the results might mirror Ms. Stone’s tale. The Iguana Tree is fast-paced and informative, with believable characters and situations. The author is not seeking creative epiphany, she’s telling an engaging, relevant story—and that’s good news for the reader.

Despite the emotions and politics tied to illegal immigration, Ms. Stone does an excellent job of keeping judgment out of her book. Hector and Lilia—and the network of recent immigrants they tap into—are depicted very sympathetically, but so are the American farm owners who employ them and the I.N.S. agent who captures them.

Even the Coyotes—Machiavellian human smugglers who engage in rape and murder as part of their unsavory profession—are painted realistically. They’re not monsters, just people involved in a nasty transactional business.

In a few spots, the narrative in The Iguana Tree is hard to follow. For example, this reviewer was confused by Lilia’s dreams of the Iguana Tree after being sexually abused by a Coyote. The melancholy that led Hector to mistreat his once-cherished pickup truck also felt underdeveloped. Perhaps Ms. Stone is less comfortable writing about thoughts than actions; perhaps this is an unavoidable consequence of faithfully reporting what she was told by people of another culture—even when it doesn’t translate well.

In contrast, some of the best moments of The Iguana Tree are the little moments of cross-cultural wonder. Hector and Lilia marvel at a boat crossing under a drawbridge. Lilia is stunned by the bathroom inside an American mega-mart store: “Even there the clean, white walls, the floor, the sinks sparkled and smelled of cleaning fluid, so unlike the facilities in her village—dark and smelling of damp earth.” With a soft touch, Ms. Stone reminds us how lucky we are to live in a place where clean toilets are a fact of everyday life.

The Iguana Tree is a triumph—an enjoyable and informative story on an important topic. Ms. Stone has found a compelling realistic fiction voice and established herself as an author to watch.