If You Have to Go: Poems 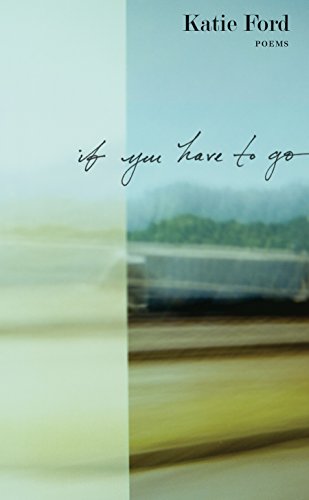 Katie Ford’s fourth book, If You Have to Go is full of wounded, distrustful, deeply inward yet insistent verse that, from the very first line of the first poem, seems to push readers away—and yet, curiously, at the same time invite further inspection, with twisted syntax and elevated diction: “Of life’s abundant confusions / this does not partake.”

Such difficult clauses are offset throughout with many phrases that are down-to-earth: Compare the same first lines of the first poem to its relatively straightforward closing lines, “Whatever my body now is bent to, // I don’t want to have a story.”

This negative desire, this not wanting to “have a story,” is compelling, because even in the corporate world, storytelling nowadays is a prized super-power. Everyone has a narrative, nowadays, for better or worse. Stories can be self-destructive, after all. Yet here’s a voice that rejects the very idea of a story, and that’s refreshing.

Now, back to the matter of syntax and diction. The initial and then intermittent difficulty the reader encounters in this book raises an important question: When we come across effectively odd or off-putting measures, like unnaturally bent syntax (object before subject, “Not a thing do I make up”); and formal diction (occasional words like “partake,” or phrases like “attendant monstrosities,” and “I name you / Solus Lapis—Latin for alone all gone to stone.”); as well as vague referents (e.g., it’s impossible to determine what “this” refers to, in the second line of “In the Hearth”), are these rhetorical gestures a kind of defensive mechanism, a self-conscious posturing from a life thrown off-balance, a life desperately trying to find its footing? It would seem the poet is raising a hand to the reader, as a strange welcome and stern warning: uneven roads ahead.

Of course, poetry has no obligation to be straightforward or understood. But while the voice in these poems appears wounded, wanting answers, it doesn’t go so far as to bear witness; the voice doesn’t care whether or not we “get it” or “believe in” what’s been said. The evidence we’re presented with is purely evocative, circumstantial at best, and not conclusive: Combs and hair, candles; kingdoms, bedrooms, walls, other rooms; beasts of burden, horses, oxen, as well as elk, a whale.

Meanwhile, the specter of love and the reality of loss are everywhere evident, throughout the broken sonnets and other forms. At the same time, the things of the world seem cobbled together, scraps of a life blown apart, and then picked back up in the aftermath; or as the poet says, “It feels pushed together / into a thing that can be argued. // We can play that game together. / Or we don’t have to.”

What’s more, in some moments the poet seems to push toward more authentic, direct speech by casting what one might call spells of disenchantment, as in “Iridescent Lake”: “If this were a symbol, I wouldn’t brave it as an elk. / It was exactly, and only, an elk.” Or, a bit more violently, in the 17th sonnet: “It makes me want to shred the faces / in front of the face.” In other words, perhaps we should all stop interpreting everything for a minute, take a breath, and simply stay as we are.

Indeed, in several stretches, there’s this palpable striving—to break down figurative speech and let be what is. It’s almost as if the voice in this book is fed up entirely with love, especially romantic and divine loves, and yes, with belief itself—and is now ready for something else.