If This Is Paradise, I Want My Money Back 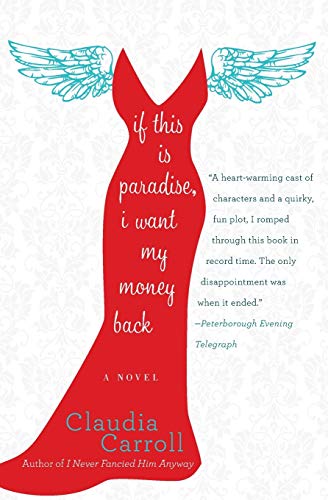 “Despite coming in at just under 500 pages, If This Is Paradise, I Want My Money Back seems to go by in a flash. By the end of the book, you are so invested in the characters and their plights that you’ll wish for another 100 pages—and pray for a sequel.”

Charlotte Grey lies comatose in a hospital bed after being involved in a serious car accident following a break-up fight with James Kane, her boyfriend of five years.

James is a producer and half owner of the production company, Meridius Movies. Blessed with good looks and charm, James reeled in Charlotte with little resistance from her. Though Charlotte can’t see him for what he truly is, her friends and family can—and they hate him.

The fight begins when James admits to falling in love with an actress, Sophie Kelly (think Fran Drescher but with an even more shrieky voice), who is gorgeous but talentless. Just like the unoriginal dog that he is, James quoted lines from a few of the bad TV movies he produced during his breakup speech.

While visiting Charlotte in the hospital James continues making excuses to her prone body (although she can hear him), then rudely takes a call from Sophie—first lying to her about where he is and then he begins talking dirty to her. As if to announce James’ treachery, alarms go off and nurses pour into the room. Charlotte feels a few jolts from the paddles, hears fading voices and then finds herself in silent whiteness.

Moments later Charlotte is with her deceased father in a place he describes as an “assessment area.” After a few days, Charlotte is given paperwork to fill out for the AWE: Angelic Work Experience. After a short course of training Charlotte is sent back to Earth as a guardian angel—to protect James Kane.

No stranger to writing humorous fiction: Remind Me Again Why I Need a Man, I Didn’t Fancy Him Anyway, and others, Claudia Carroll’s cheeky writing style is addictively entertaining and undeniably funny. Penning yet another home-run, If This Is Paradise, I Want My Money Back is a special blend of chick-lit that is a fast-paced joy ride with a complete cast of endearing characters who never fail to amuse; and, that even includes the incorrigible James Kane.

Charlotte is especially charming, relatable and quite human—especially in her role as guardian angel. Despite her new position, she maintains her human flaws, though her intentions are good. Like a loveable klutz, most of what Charlotte does to “fix” things actually ends up making them worse.

As is common in books with a handful of characters and multiple story arcs, the secondary are either limited to rote support roles or act merely as page filler; however, this is not the case here. Every character is strong, self-supporting and inherently interesting, allowing the reader to remain engaged in each moment, rather than feel impatient to return to the action of the main protagonist.

With a keen eye for structure, the author provides a well-informed peek into each of the people in Charlotte’s life: from her rather dependent mother; her spinster-fearing best-friend Fiona, who’s forever trying to find love on the internet; to her put-together sister Kate, with her perfect house and her perfect husband, “Perfect Paul.” But throw in Paul’s not-so-perfect family and an affair and Kate’s façade of perfection slowly begins to slip. As with the wit, Ms. Carroll doesn’t try to laugh off the more serious moments, but allows the characters to feel the full emotion of the moment.

Despite coming in at just under 500 pages, If This Is Paradise, I Want My Money Back seems to go by in a flash. By the end of the book, you are so invested in the characters and their plights that you’ll wish for another 100 pages—and pray for a sequel.