If I Die Tonight: A Novel 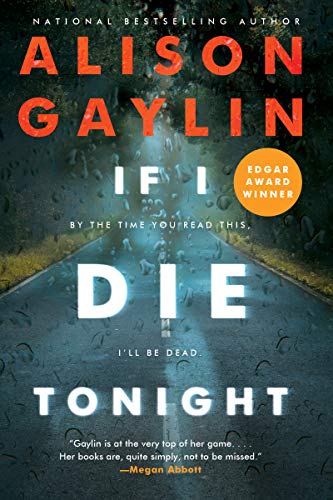 Divorced mom Jackie Reed worries about her oldest son Wade. His actions have become questionable. But is it teenage angst, or is something really bothering the 17 year old?

One rainy night, Jackie awakens to a noise other than the pouring rain outside. She investigates and she sees Wade out on the doorstep smoking. She promised herself she would never be the type of mom to snoop into her kids' personal lives, so she sighs and returns to bed.

An accident occurs that night in the small upstate New York town of Havenkill where the Reeds live. An aging rock star claims she was carjacked and the driver who snatched her vehicle ran over local, popular high school student, Liam Miller. She allegedly was returning from a gig when this young boy dressed all in black, wearing a hoodie to cover his face, made her stop then pushed her out of her Jaguar. Shaken and noticeably upset, this musician, known as Aimee En, is more concerned with her precious 1973 Jag than the fate of the boy who was hit and later perished.

"She [Jackie] put the wet laundry on the folding table and pulled it all out... Black hoodie. Black T-Shirt. A part of dark jeans with one of the pockets ripped off. The same clothes Wade had been wearing the night before last when she'd seen him on the front step.

"Why had he run them through the dryer?

". . . when she returned to the kitchen, she saw Connor, sitting at the kitchen table, staring into his hands, into his phone screen. 'Any idea why your brother...' She stopped. Connor was looking up at her, phone still clutched in front of him. His jaw was tight, his lower lip trembling so slightly, she doubted anyone other than a mother would notice. 'Liam?' she said.

"He nodded. Jackie went to him. He didn't start crying until she took him in her arms."

Before long, this tragedy runs rampant over social media with everyone speculating on who the carjacker could be. Aimee En's description of the guy vaguely matches that of Wade Reed who is more or less an outcast and loner.

Jackie and younger son Connor cannot fathom Wade would commit a crime, and they fully support him until Wade's temperament and circumstantial evidence point to him being guilty.

The first on the case is Pearl Maze, a young police officer. With speculation that Aimee En is responsible due to her drunken past, Pearl feels the woman is innocent and hopes to prove it. Maze with a dark history herself isn't the best one to make assumptions. The FBI takes over as the small-town authorities aren't equipped for crimes this serious, yet Maze does not trust these officials.

This insightful thriller commences with Reed posting his suicide on his mother's Facebook page. Well-fleshed-out characters each share their own separate agendas and back stories. Many viewpoints express their stance on the matter of Liam's death along with a troubled young man who is thwarted by hurtful social media that convicts without all the facts. A true taste of how enmeshed in social media we have become.