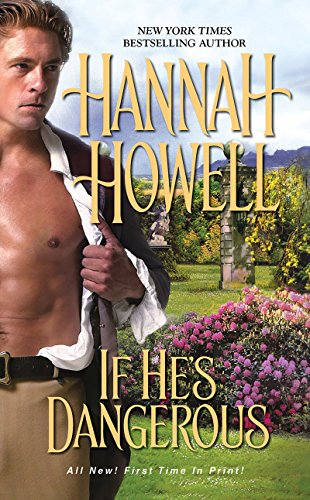 “If He’s Dangerous is a pastoral love story cradled from beginning to end by a writer clearly in control of her craft.”

If He’s Dangerous is a pastoral love story cradled from beginning to end by a writer clearly in control of her craft.

Lorelei first meets Argus Wherlocke when he appears naked in her garden, modestly sheltered only by a conveniently (or inconveniently, if you are the curious Lorelei) rosebush. It turns out that the apparition is not, in fact, Argus, but Argus’s soul, which he’s sent to his family to let them know he’s in trouble. Through some sort of mystic mistake, he appears in Lorelei’s garden instead, and Lorelei is charged with taking his plea for help to his family.

Lorelei does as he bids, but, being a strong and caring person, also does her own bit of rescuing, locating Argus and rescuing him with the help of her cousins. Unfortunately their escape is not seamless, and the men who have been keeping Argus captive—and rendering him broken and bloody—catch a telling glimpse of her as she makes her escape.

Argus is in no shape to travel, so Lorelei takes him first to her cousins’ place, then the home of her father to nurse him back to health. Along the way she notices his fine musculature. He notices her fine eyes. They notice their fine rapport. And then every member of their respective families descends on Lorelei’s father’s ducal estate.

Further, the secondary characters are just as strong and their relationships just as enjoyable. Lorelei and her father share a special bond; they both have a lovely relationship with the Duke’s other children (all sixteen of them). The Duke is well-drawn, eccentric, prolific, warm. His friendship with the butler, Max (and Max himself) are among the best parts of this novel as they share discussions, mutually offer advice, and exchange bon mots. The Wherlockes are equally capitvating. And, as with our leads, these secondary characters are not props, happy previous characters revisited, or sequel-bait, but three-dimensional beings in their own right.

If He’s Dangerous is a quieter story than readers will be used to, gentler than what is mostly out on the market at the moment. But readers looking for a deeper connection with characters, rather than a breathless rollercoaster ride would do well to consider picking it up.