The Identicals: A Novel 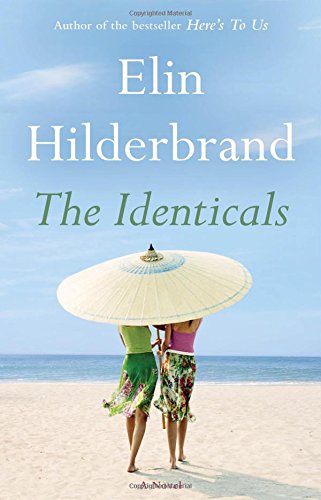 Do identical twins share more than the same DNA? Are their temperaments, needs, and desires similar? Elin Hilderbrand's The Identicals explores the lives of Tabitha and Harper Frost, so matching in looks it's easy to mistake one for the other.

"When Harper and Tabitha were growing up. Lots of people thought they were interchangeable. They looked exactly alike, so therefore they were exactly alike."

Harper resides on Martha's Vineyard, where, after her parents' divorce, she went to live with her father, Billy. Easy-going and a free spirit, Harper often dips her toes into the deep waters of disaster. Fired from a job for making a drug delivery, not knowing the contents, she fortunately wasn't incarcerated. Currently she is having an affair with Reed Zimmer, the local doctor treating her father and whose wife Sadie discovers Reed's infidelity. With the Vineyard as small as it is, Harper becomes the topic of the newest scandal.

Tabitha lives on Nantucket, after winning the short straw and being raised by her snobbish and pretentious mother, Eleanor, a well-known dressmaker and boutique owner. Never married, Tabitha is raising 16-year-old Ainsley who proves to be more than a handful. Tabitha's character is snooty like her mother, and she cannot manage relationships with men. After she lost her son Julian as an infant, the hurt has remained for years and also caused an estrangement between her and Harper.

Tabitha, Eleanor, and Ainsley go to the Vineyard for a memorial after Billy's death. Tabitha, mistaken for Harper, is accosted by Sadie, causing a ruckus. Again dismissed from another job, Harper only wishes to escape her home where gossip runs rampant.

Returning to Nantucket, Eleanor takes a fall and is airlifted to a Boston hospital where she requires surgery. Tabitha knows her mother expects her with her, but what about Ainsley? With no social life and her past lover dumping her for another, younger woman, who can she rely on? When Ainsley informs her mother she begged Harper to take care of her, her mother is livid. Tabitha doesn't want her sister in any part of her life, but Eleanor requires she be with her, regardless of the fact that the business and their local store, which Eleanor owns and Tabitha manages, is failing.

Harper sees this as a chance to flee from her duplex, even though she should stick around to sell Billy's home. She hates being the brunt wagging tongues and leaving for a while should stop the rumormongers. Tabitha tired of being responsible for her hard-nosed mother and irascible daughter gives in and offers to renovate Billy's house; remodeling is something she always dreamed of doing. This way they can attain a better sale price, and Tabitha will finally have some time to herself.

Each at the other's domicile, they are more settled and stress-free. Harper befriends Ramsey, Tabitha's ex-lover, while Tabitha falls in love with Sadie's brother. Quite a mishmash of emotions and what many would consider a huge contradiction.

Ramsey questions Harper about her sister: "Explain to me how she can be so uptight, and you can be so laid-back. Was it always that way?"

"Was it always that way? Tabitha had long been an approval seeker, whereas Harper figured if other people didn't like her, they could buzz off. Harper was, by nature, lazy and easily distracted . . . As an adult, it seems, the traits that distinguished the twins from each other had only become exaggerated and solidified. . . ."

The sisters may be indistinguishable in appearance, but that's where it ends. Once close as two peas in a pod, their 14-year separation leaves them bitter and entirely different in their outlook and views on life. What happens when the women find themselves in each other's shoes? Will they be able to discern the reasons why the other acts as they do? Will this give them the impetus to let bygones be bygones and reclaim the love they once shared?

The Identicals delves into the complexities of family interactions dealing with discord, misunderstandings, and hurts. A compelling read, slowed down somewhat by the name dropping of places and goods, it tends toward the ostentatious, yet the sentiments and disparity of the well-developed characters carry the plot to a satisfying conclusion.