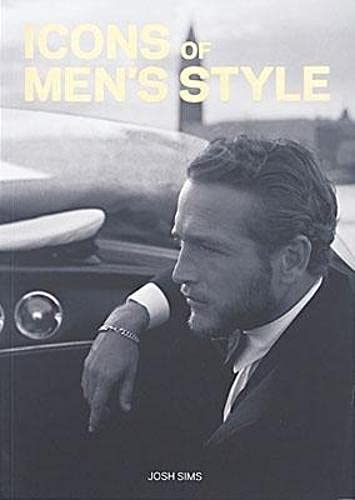 An icon, by definition, is a widely known symbol and is supposed to possess instant recognition. Icons of Men’s Style might lead you to believe that its content is about men or personalities who symbolized great style and who personified or exemplified a particular style. If so, you can expect to be disappointed.

Another issue here, which is so common with books of this genre, is that the author is British, which means that we Americans don’t always use the same terminology to describe the same items. There really needs to be a disclaimer or warning at the onset explaining this as it can get very confusing. There have been several other very similar books that deal with the same subject matter but eliminate the word icon from their titles and just employ style as their root source. Title aside, the subject matter seems to engender great amounts of what most would consider useless information.

Once you get past the misleading cover and title, you are suddenly faced with another facet of fashion and that is the idea of too much information about the spotlighted items, which most will consider relatively common or totally arcane. Could you tell the difference between a bomber, flight, or blouson jacket? Do you care or need to know each of their origins and history in grueling detail?

Then there are these categories that are woefully short on styles or subcategories to the point of absurdity; if you want to breakdown the classification of underwear, why is the “y-Front” better known as the “fly front” in the USA, and the boxer short used as the only stylistic examples? The same holds true in the pants category. The authors might have added square cuts or boxer briefs to underwear and could have certainly mentioned pleats, waist stance, and leg widths in the latter.

Then there is the case of shirts, in which the author makes no obvious distinction of collar or body yet they use Hawaiian as a category when the mere name is about the print rather than the style. If one had to be technical about the shirt body it is a bowling shirt.

Once again the reader has been confronted with expectation versus reality. A subtitle might have helped or some type of cover blurb on the cover might have clarified the topic. It is once again ”lost in translation,” where the use of the word icons might have been replaced by symbols or staples of style which would have yielded a far different expectation from its reading.