The iConnected Parent: Staying Close to Your Kids in College (and Beyond) While Letting Them Grow Up 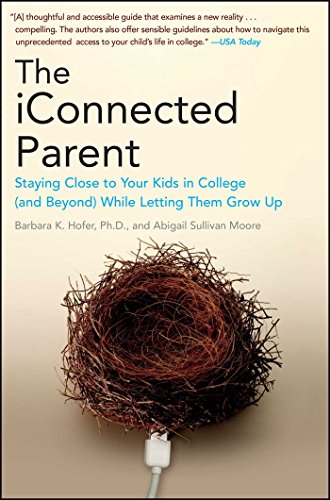 So what happens to helicopter parents and their children when the kids go to college? Well, that’s precisely the question Barbara K. Hofer and Abigail Sullivan Moore set out to answer in the new book, The iConnected Parent.

The title brings up an interesting issue and a growing phenomenon—parents who are so extremely connected to their children in a communications age where texting, emailing, Smartphones, and data plans mean the apron-strings never really need to be cut.

Helicopter parenting, loosely defined as the syndrome of over-involved parents who schedule every moment for their children, always hovering to make life easier and make choices for them, is a popular topic and a relatively new term. We’ve all read of the parents who program their children to the extent that they are rarely left to their own devices. Preschools chosen from in the womb and playdates stacked back to back from birth. But until now we haven’t really been given an accurate picture of what those families look like as they mature. This book examines that picture and it truly is surprising.

Hofer and Sullivan have done some remarkable work here surveying students and tracking the number of times per week they are still in contact with parents after the kids leave for college. They found that the number of times families communicated per week was an astonishing 13.4.

That figure did not lessen as the young students grew more comfortable in their new surroundings; instead it remained quite consistent. While one might expect that the kids indicated resentment or a wish for less communication with parents, it was not so. Most reported a high degree of acceptance and comfort with their arrangement. They had grown up on cell phones and email and found it natural to call parents frequently and share information on test scores, classes they signed up for, discussions of social adventures, and advice on choosing a major. “Whenever (my daughter) was bored, I was her entertainment.”

The authors questioned whether income level, race, ethnicity, or distance from home might have an impact on the amount of contact. But none of these factors made a difference. The only slight variation noted was one of gender: daughters phoned home more than sons. Daughters called 14.5 times a week as compared to 11.3 times for sons, and more often both genders were likely to speak with their mother than the father.

The communications, Hofer and Sullivan found, were not one-sided at all. Parents too found it commonplace to check in with their kids.

While this research is slightly shocking in that it appears most parties are comfortable with the electronic tether, anecdotally there are some astonishing exceptions. There is the mother who tried to log on to her daughter’s university web account only to be told the password wasn’t working. Well in this particular instance the mother wouldn’t give up, until after 75 failed attempts to guess the password, she crashed the university registration website.

Then there are the parents who get pulled into their young student’s social lives hook, line, and sinker, instantly emailing the roommate or some college official to confront and resolve the problem. These are just a couple of the silly stories that show children rendered impotent in problem solving.

One might think then that The iConnected Parent is a sort of cautionary tale warning parents to steer clear from constant contact with their child in a hyperconnected world. Not so. It is simply a snapshot in time showing a strangely evolving phenomenon.

Thankfully this book is not all finger-pointing. Barbara Hofer is a psychology professor at Middlebury College, and Abigail Sullivan Moore is a frequent contributor to the New York Times, writing about children and educational issues. As a result of their partnership this book is a well rounded picture, both of research and reporting, a more three-dimensional product than it would have been if either one had chosen to write it independently.

The authors take time to add prescriptive advice. Some of it as simple as: Don’t always jump to answer the phone during the high school years when your child forgets their hockey sweater or exam paper at home. Building independence can be done in this odd new communications age, they say, but it must be worked on consciously, with parents who remember to check themselves when the urge to over-parent presents itself.

Parents, who presently are more inclined to be staffing the school bake sales, emailing teachers, and getting involved on student council, must work toward tapering off their involvement slowly in the teenage years. The goal, Hofer and Sullivan, seems to indicate, is to build strong students who are self sufficient and their own advocates.

This is a trickier goal as a result of the nature of communications in a 24/7 world, but still achievable.