Island of the Blue Foxes: Disaster and Triumph on the World's Greatest Scientific Expedition (A Merloyd Lawrence Book) 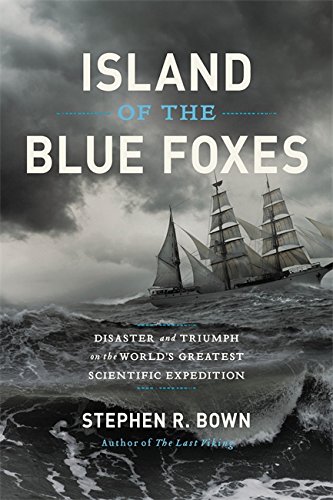 “an opportunity for all to learn about Bering and his contributions to the geographic and scientific knowledge gained as a result of his efforts.”

When the Age of Exploration is mentioned, most people have a tendency to think of the early explorers such as Columbus, Magellan, Da Gama, and others. Yet many don't realize that that era actually extends up into the 20th century, if not to today as we continue to explore every corner of our planet, in particular the oceans, as well as outer space.

The explorers of the first few hundred years were handicapped by any number of factors: The primitive state of technology (such as sailing ships), limited means of communication at virtually any distance, financial and logistical requirements of such an undertaking, human superstition and lack of any knowledge of or ability to anticipate regarding the unknown into which they were traveling. The latter necessarily meant death for some instead of the glory and honors sought.

Initially, exploratory expeditions were mostly intended to blaze new routes to China and the exotic East Indies to garner new lands in order to exploit "inferior" native human populations and natural resources such as gold, spices, and foodstuffs. Only later did the voyages of discovery evolve into explorations for natural and scientific purposes.

In this instance, Russia's Czar Peter the Great underwrote and supported expeditions conducted and led by Danish explorer Vitus Bering in the first half of the 18th century. Bering was already a well-known navigator and ship captain, having served in the Russian Navy before becoming the Czar's point man in terms of exploring the Russian Far East and, ultimately successfully, extending Russia's influence to North America.

The patronage of the Czar was crucial. It was the only way that the expedition could be gotten off the ground, especially since virtually all of the tools, equipment, and other necessities would have to be shipped across the breadth of Russia where ships would then have to be built to carry the explorers across the North Pacific Ocean.

As with most endeavors, not everything went according to plan. From lack of financing and manpower to bandits, uncooperative officials, and the vagaries of weather and terrain, Bering was sometimes forced to bend rules and improvise to accomplish his objective, all the while faithfully discharging Peter’s orders.

On the other hand, once the expedition got underway, it encountered many successes, particularly in the scientific realm. Aboard ship with Bering was now-renowned naturalist Georg Wilhelm Steller whose duties were to observe, identify, list, and collect any specimens found of flora and fauna.

Unfortunately for Steller, he didn’t always get the exploration time he wished and so occasionally failed to observe species or obtain specimens for collection. However, his observations led to many new species being named for him, for example, Steller's sea cow.

Contact with native populations to discovering islands and claiming new lands for the Czar meant long periods at sea which, in the 18th century, could jeopardize lives. In the event, the expedition’s ships became separated and Bering’s ship was grounded on the shore of the island referenced in the title, inhabited by blue foxes which bedeviled the men by taking clothes and what available food they had.

Bering and his men were bedeviled as well by weather, exhaustion, and fatigue but also by the scourge of sailing mariners: scurvy. However, this was not the cause of Bering’s death as his grave was exhumed in 1991 by scientists, his remains examined, and they determined that he probably died as a result of the many hardships he had suffered during the expedition.

In a scene reminiscent of the phoenix risen, enough timber was salvaged from their grounded ship that a smaller vessel could be built using the still available tools, materials, and surviving manpower. The remaining survivors eventually made their way to Petropavlovsk, completing their mission, where they were hailed as heroes, having been given up for dead.

Employing many of Bering’s papers and archives along with the scientific notes Steller made in his duties, Stephen R. Brown, the author of other books on explorers and scientific adventures, has weaved a story which details the highs and lows of one of the greatest expeditions in world history and one which has been largely forgotten by mainstream humanity.

Consequently, this book is an opportunity for all to learn about Bering and his contributions to the geographic and scientific knowledge gained as a result of his efforts.