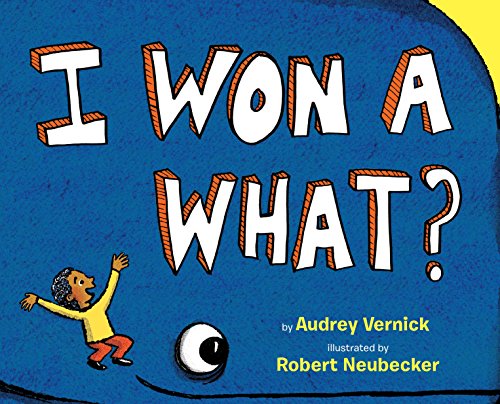 You want a pet. You really want a pet. But your parents don't allow anything hairy, scaly, slithery, barky—basically your parents are killjpoys who simply don't believe that you'll do all the chores related to the pet just like you promised. So you are very sadly pet free.

Until you go to a fair and your parents relent. You can play the ping pong ball toss and keep anything you win. Anything? Anything. You promise? We promise.

"Nuncio, it turns out, is bigger than a goldfish. Or a dog. Or a goat. Or a baby elephant. Or a refrigerator."

Nuncio is a whale.

Your parents are horrified. But a promise is a promise. So they agree to try out Nuncio on a trial basis. They haul Nuncio home and put him in their conveniently enormous pool.

Feeding Nuncio is fun. You tell him all about school while he listens and eats. Your parents are not excited by having to procure truckloads of fish and fish-like creatures.

Nuncio jumps high in the air. He sings weirdly beautiful songs "like a musical cow." And riding on him in the ocean now and then is super fun. Your parents aren't really happy about everything Nuncio can do, but they are just doubters.

Until Nuncio starts helping them out. He's so helpful! Who knew a whale could be so accommodating?

I Won a What? is a funny study in perspectives: those of a child versus those of a parent. Children will delight in all of Nuncio's innocent antics. The simple yet expressive illustrations by Robert Neubecker are sweet enough to give a big blue whale a heck of a lot of personality. And the ending is really cute. Lots of fun.