I Won’t Give Up My Rubber Band 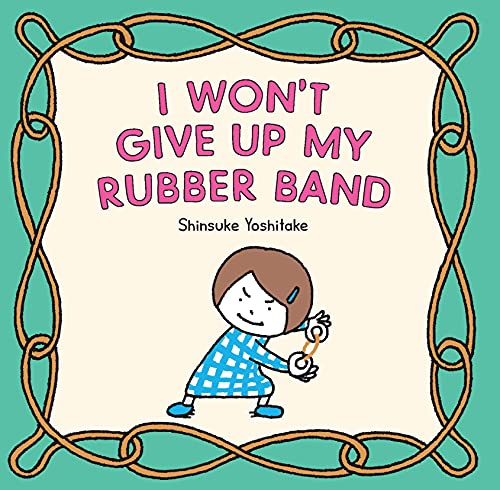 Do you remember when everything on the ground was a treasure? Now, as adults, it seems almost incredible to watch a toddler who is obviously awestruck and joyful, finding something on the ground we would just completely ignore, step over, or throw away.

I Won't Give Up My Rubber Band recreates that lost wonder with humor and wisdom.   Shinsuke Yoshitake Is the popular New York Times bestselling Japanese author-illustrator of many award-winning books. Now he has released this new picture book for a three- to five-yea- old audience and the adults who will chuckle at his sly humor.

Yoshitake is masterful at thoughtfully tackling life's challenges for the youngest minds who must explore and make sense of their world. Whether it's what lies in the future— the good and the bad—or what makes life boring, Yoshitake recasts these age-old problems with unadorned whimsical cartoons underlying serious and thought-provoking subject matter.

In this case it’s claiming something that is truly your own. Have you ever wanted something that was just yours? Of course. The little girl in I Won't Give Up My Rubber Band is ecstatic and overjoyed at what she has found: a rubber band. Not one of her brother's hand-me-downs or something she has borrowed or has to share, this rubber band is all hers.

With boundless imagination and limitless possibilities, the little girl soon befriends her very special rubber band. Now she plays in the bathtub with her new best friend and sleeps with it on her pillow. Her imagination expands exponentially: love letters can be held together, bad people can be caught, and "When the time comes, I will save the world with this rubber band." She even imagines traveling around the world to meet more people and animals with her magical rubber band. And finally, her flexibility and expansiveness are demonstrated—just like her rubber band’s—when it snaps and breaks.

Readers young and old will laugh out loud. Such a glorious gem of a book on so many levels—highly, highly recommend Yoshitake's latest addition for our reading pleasure!

Diana Y. Paul is a staff reviewer at New York Journal of Books.