I Was Hitler's Pilot: The Memoirs of Hans Baur 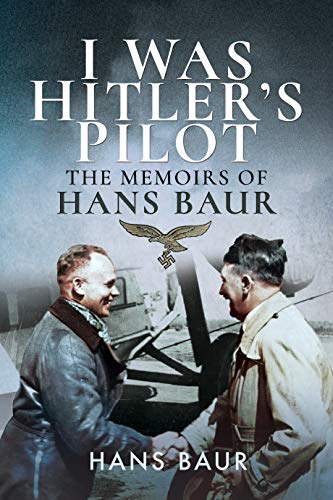 In his memoir, I Was Hitler’s Pilot, Hans Baur provides more insight into his love of flying than he does discussing his role as Hitler’s pilot. The book is written in five parts—no chapters, although each part may be considered a chapter unto itself, constructed of short anecdotes that frequently have no finality to them.

The introduction by Roger Moorhouse (2013) provides a brief overview of the events covered in the book. He describes it as “a fascinating and illuminating memoir by someone who moved in Hitler’s inner circle and who enjoyed his unalloyed trust.” While this may be true to some extent, it is most interesting to note that Bauer’s true love of flying is what occupies most of the anecdotal content.

Baur’s flying experiences started prior to World War I, and through that war he earned a name for himself then furthered his experience as he flew with Lufthansa. Through his flying life he associated with many important persons, included among the names he drops in the book are Dr. Hainisch, the President of the Austrian Republic (1926), King Boris of Bulgaria, Stalin, Mussolini, and of course, Hitler, as well as many of his officers and cabinet members.

As Hitler came to power, Baur came to his attention through his various flight experiences. Hitler was not enamored of flying but was astute enough to know that if he wanted to gain the confidence of the people he would lead, he had to meet them, and flying was the most expeditious way to accomplish that. After several trips together, Baur recalls “Hitler’s complete confidence in me had led by this time to a more intimate and friendly relationship.”

While dropping names throughout the book, it is interesting that Eva Braun only appears in a few anecdotes. His first observation is most telling. “I had already heard a good deal of Eva Braun before I met her. For many people her relationship to Hitler was a surprise, and to some a disappointment, but for me it represented perhaps the most human thing I knew about Hitler.”

It should come as no surprise that through Baur’s friendship with Hitler he found the man to be something different from what history has painted. Baur did, indeed, find Hitler to be “most human.” He writes that “Hitler was essentially a man of simple tastes, and he disliked luxury and show.” In one passage Baur discusses a meeting between Mussolini and Hitler, where Mussolini provides a state banquet given in Hitler’s honor. In a conversation between Hitler and Baur after the event, Baur’s opinion was the “He (Hitler) loathed all such obsequious ceremonies.”

Baur further expresses an opinion of Hitler’s relationships with foreign leaders, in particular his attitude toward Britain. “Hitler often expressed his admiration of British international diplomacy, and the idea of friendship with Britain cropped up again and again as a sort of sheet-anchor in his conversation. For my part, I believe that he was perfectly sincere in this desire.” An opinion that the British would have, no doubt, found curious.

Although, as mentioned above, Baur’s book is constructed of short personal anecdotes, in the part where he writes about World War II, Baur goes into much detail regarding an attempt on Hitler’s life, and yet Baur did not experience this event himself. It is the only time in the book where he writes about an event outside of his own personal experience.

Baur remained loyal to Hitler to the end, even though he realized by the end of the war that Hitler’s actions were beyond excusing.

It is interesting to note that while Baur reveals his relationship with Hitler, it is more interesting to read about his many flying experiences still in the early days of flight that were, at times, calm and enjoyable, while other times nerve-wracking and terrifying. The book is riddled with these experiences.

It is not until Baur gets to the end of World War II and is captured by the Russians, that his flying experiences cease to exist, and his memoir relates the hardships he experienced through ten years of captivity and torture.

It is curious that throughout the book Baur expends few words on his personal life regarding his family. It is apparent that his life with his airplanes and his life with Hitler were considerably more important.

I Was Hitler’s Pilot, while not a blockbuster, has its interesting moments. This is a reprint of the original and does not move further than his release from Russian captivity in 1955. Readers interested in early aviation history will find some interesting anecdotes in Baur’s account.