I Remember Nothing: and Other Reflections 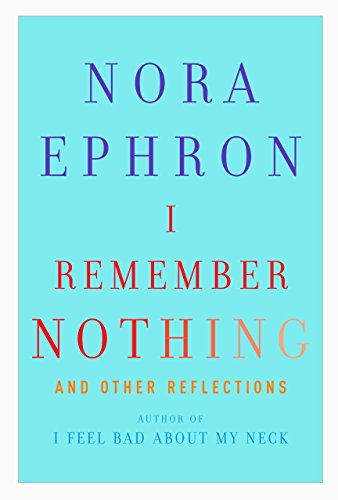 Nora Ephron is back, with her introspective look at life, recalling all that she hasn’t yet forgotten. If you read I Feel Bad About My Neck, or her earlier works, you know her essays are rich with self-deprecating humor at its finest. In addition to her books, Ephron wrote and directed the film Julie & Julia. She also received nominations for several earlier screenplays, including: When Harry Met Sally, Silkwood, and Sleepless in Seattle. Known for her casual humor and her realistic spin on the world, Ephron writes in an engaging manner, so much so that you can almost hear her laughing as she pounds away at the keyboard.

In I Remember Nothing, and Other Reflections, her seventh book, the author takes us along on her genuine reflections of past loves, hurts, food, fun and writing. She peers ahead, too, not sure whether to celebrate or hide from “The ‘O’ Word . . .” oldish, aware that someday, like all of us, she will transition from oldish to really old. She is wise enough to desire to make the most of each day, but aims low, settling for a frozen custard or a walk in the park.

Ephron’s penchant for list making shows the depth of her cultural awareness, when she boldly refuses to know anything about troublesome matters such as Twitter, Monkfish, and the Kardashians. In I Remember Nothing, Ephron proves she never forgets an injustice. Surprise turns to horror when she discovers a restaurant honored her with “Nora’s Meat Loaf” only to find it was a sign of problems with the restaurant.

A clever turn of phrase seems to amuse her as much as it does the reader. The twists and turns of her story jump off the page as if in conversation, with you laughing and nodding your head in agreement, as she relates the failure of her family to appreciate her desserts at Christmas dinner. She deals quietly with the frustration rather than prove she was not “the all-time world champion in the can’t-take-a-hint department of life.” Her honesty even extends to the admission that she too wastes time on online—especially playing Scrabble, until the day her favorite Scrabble game disappears, but the addiction does not, not even in her dreams in which people turned into letter tiles.

In this short book, of 23 essays, Ephron takes her time, contemplating aging, and in fact, makes a list of things she will and won’t miss when she’s gone. If you think that sounds easy, try it. Her life and her world are so rich, how could she keep the lists so brief, when her life is so full, and so funny? From her first job in journalism as a $55 per week mail girl at Newsweek, Ephron made her mark in the then male-dominated industry, and created a career rich with writing, including her work at the New York Times and New Yorker. She’s never been more real than in this collection—a full pleasure to read.