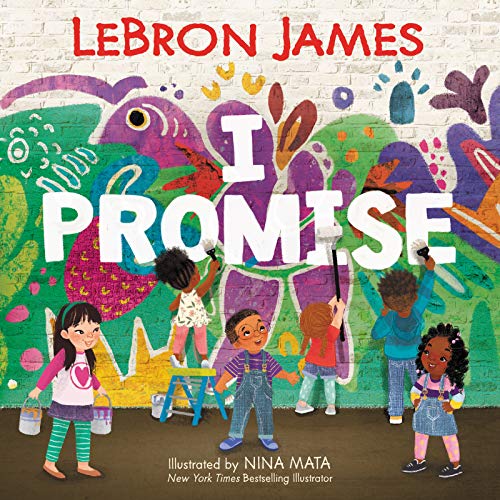 “James seems to be making his own promise as well—to continue to be a solid role model for children— in showing the way to becoming a good person and citizen of the world.”

I Promise by LeBron James is not simply another celebrity-penned children’s picture book. It’s true that James is a superstar athlete with out-of-bounds talent on the basketball court. It’s true that James has also borrowed against this position of dominance to become a cultural icon and celebrity. But it’s also true that James has used these platforms to give back. The LeBron James Family Foundation, in his own words, “was inspired by the big dreams in my hometown (Akron, Ohio) and around the world.” In this debut picture book, James has created a book intended to support the mission of his Foundation: to help kids “reach their full potential” through a series of promises that illuminate a mantra that has served him well, “Setting goals, working hard, and holding yourself accountable are the first steps to success.”

An unstoppable force on the court, James uses what he has learned and mastered about the game to show kids what is possible in their own lives—by making a commitment to themselves—“I promise to work hard and do what’s right, to be a leader in this game of life/to follow the rules and respect the game plan/to run full court and show up each time/to remain strong yet humble with every win and defeat/to throw the alley-oop and uplift others on the spot/to be a team player and a winner/and to keep my head up, and never give up . . . no matter what.”

Nina Mata’s cheerful and colorful digital illustrations depict a multicultural mix of kids striving to keep trying to do the right thing. Just like the cover, where kids come together to paint a mural, the optimistic and unifying message (“We Are Family”), from beginning to end in this book, is for kids to promise to focus on achieving personal, interpersonal, and social goals—of making things better.

James presents these promises using a mix of perfect and imperfect rhymes, each one circling back to being accountable to oneself. While he highlights that achieving these goals is not always straightforward, that there will be hardships, and times to ask for help as well as making room for second chances, James pays less attention to our limitations. That is, don’t kids also need to know that not everything is possible (i.e., what to do when you lose), that they can’t do everything, but they can try to do the best they can with what they have and attempt to do—and still reach higher?

I Promise is a motivational and inspirational rally, cheer, and a call to action. In a coach-like fashion, James encourages children to be their best selves, “I Promise to be me.” To do so, he emphasizes the importance of practice and hard work, “Nothing is given. Everything is earned.” In the end, he asks children to take an oath of promises that underscore going to school, doing homework, listening to teachers, and ultimately finishing school. Given his status as a superstar and cultural father figure to all those kids who look up to him, his words are ones that will hopefully fall on many listening young ears.  James seems to be making his own promise as well—to continue to be a solid role model for children— in showing the way to becoming a good person and citizen of the world.