I Loved Her in the Movies: Memories of Hollywood's Legendary Actresses 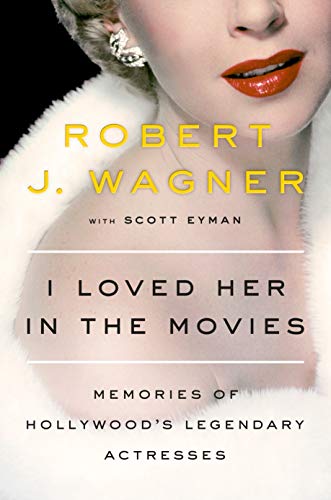 I Loved Her in the Movies, Robert Wagner’s remembrances of the many actresses he has worked with, gives snapshots into the world of films and female stars from as far back as the silent screen.

Although his work in movies began in 1950, his discussion about his acquaintances with actresses from earlier industry eras is an interesting take on who they were, what they were like, and what challenges they faced in an industry not always gracious to them.

Wagner, with his co-author Scott Eyman, covers a substantial catalog of women in short, often cautious, anecdotal descriptions and stories. If anyone is looking for a tattletale book on Hollywood actresses, this is not it.

It is safe to say that Wagner paints very few negative pictures, and the words on any negatives are well chosen, short, and not terribly unkind. His discussion of working with Raquel Welch is a good example, when he says, “While I worked with a lot of actresses during this era, most of whom were special ladies, I wasn’t crazy about my experience with Raquel Welch.” He referred to her as unprofessional in her acting behavior, yet that is as far as he goes toward the negative.

The stories are well organized in chronological order—from the silents through the mega-stars of the 1940s and beyond. The anecdotes flow back and forth, often reintroducing characters he has previously discussed. While the stories are, for the most part, short, there are several stars that Wagner chooses to spend a little more time on, and in certain instances these stars appear in numerous places throughout, depending on their career arcs from one decade to another.

In addition to talking about these actresses, Wagner provides insight into how changes in the film industry impacted them—changes such as sound and technical improvements in filming.

He also discusses the many instances when actresses were treated differently as they aged and how some struggled to continue their careers while others recognized the industry attitude toward age and got out before they were shunned.

In his chapter “The Eighties (and On),” he talks about how the industry is not heavily invested in female actresses today. He writes: “the media surrounding celebrity has never been more carnivorous than it is today, and what you have is a recipe for shortened careers.”

A few special actresses get additional discussion. One of his favorite actresses, lovers, and friends was Barbara Stanwyck, and he references her several times throughout the book. He makes his feelings clear when he says: “no actress of her generation is remembered with more affection . . . and respect. I’m no different from anybody else—I have endless respect for her. But I also love her.”

Twice in the book Wagner has what he refers to as “Intermission I” and “Intermission II” where he takes a moment to discuss very briefly, character actresses and behind the scenes industry personnel with whom he has come in contact or he has respected from a distance. His respect for these individuals is apparent as he describes their careers, often as confidantes to stars or as secondary characters—not as stars—but whose contributions to their roles is immense.

Of course, the book would not be complete without a discussion (carefully choreographed) about his relationships with Natalie Wood and his current wife, Jill St. John. He devotes a full, albeit short, chapter to each woman and the important rolls they play(ed) in his life. He refers to Natalie’s death only as “When Natalie died, I thought my life was over.” He writes fondly of Jill St. John, “We’ve been together for more than thirty years, and I still have a sense of discovery with her every single day that goes right along with an underlying feeling of security and contentment—the best of both worlds. I owe her everything.”

In his epilogue, Wagner sums up his observations of the women he has known and worked with in the film industry: “All the women in this book had different kids of careers, different needs as actresses, different needs as women. But they all shared one primary characteristic: They all said yes.” His inference is that they knew what the industry was all about, and “that was just the way of the world.”

For anyone who is intrigued by the film industry—history and/or present—this book is a fascinating walk through the lives of the women who made and make it a popular entertainment venue. This one belongs on the library shelf.